Actress Anushka Sharma took to her Instagram story today to pay her last tribute to Bollywood actor Asif Basra who was found dead at a private guest house in Dharamshala in Himachal Pradesh at the age of 53 on Thursday. Sharing a picture of Basra, she wrote, “My sincere condolences and prayers with the family and the loved ones. RIP Asif Basra.” 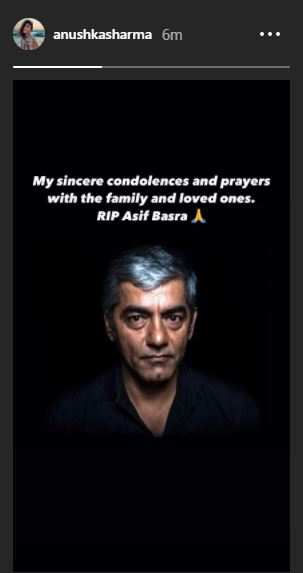 Both Anushka and Asif had worked for a popular 2020 web series.

Meanwhile, other Bollywood celebs, including Emraan Hashmi, Swara Bhasker, Manoj Bajpayee, Hansal Mehta, Mukesh Chhabra, and many others continue to mourn the loss of the talented actor.

Suspecting death due to suicide, ANI further quoted, “Prima facie it is a case of suicide but we are investigating the cause. The body has been sent for postmortem: SSP Kangra Vimukt Ranjan on actor Asif Basra’s death. #HimachalPradesh.”

K’taka may get law to curb cow slaughter too | India...