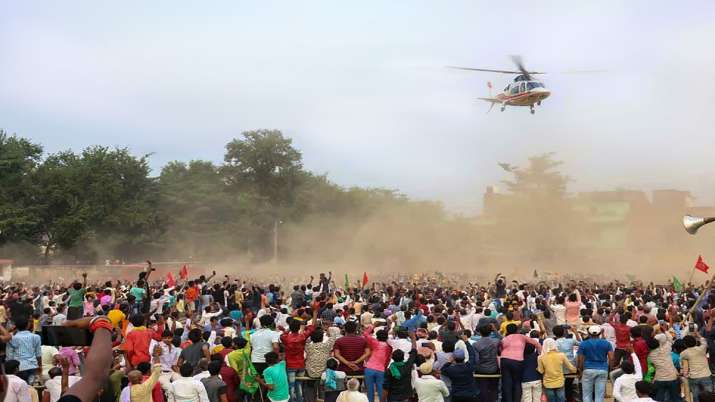 Nineteen lakh jobs, if elected to power, proclaims BJP, as a counter to 10 lakh job offer by RJD. Upping the ante, BJP promises 11 focused dole for the improvised state of Bihar. While most speak of so called development, the first of all the promises, grabs maximum attention. As its first Poll Promise, BJP has offered free Corona Vaccine, when approved for use to all Biharis. Yes, this is a serious offer by the BJP. And even before people could digest this bumper offer, came a clarification from the BJP IT cell head, Amit Malviya – “BJP manifesto promises free CoVid vaccine. Like all programs, centre will provide vaccine to states at a nominal price. It is for the state Govts to decide if they want to give it free or otherwise. Health is a state subject, Bihar BJP has decided to give it free, Simple”.

First things first. BJP will offer corona vaccine free of cost to all its voters in different states, if they vote the national party to power in the respective states. So after Bihar, Kerala, Tamil Nadu, Pudduchery, Assam and Bengal stand the first chance of getting free vaccines as these state go for polls in 2021. Uttar Pradesh, Punjab, Uttrakhand, Goa, Mizoram are the batch after as they go for polls in 2022. The entire nation gets free vaccine only in 2024, as that’s when the entire nation goes for polls. Until then, wait for your turn. India must be the first country in the world which has actually put a price to its vote in terms of corona vaccine. Even US President Donald trump, couldn’t muster enough courage to mouth such profanity. In the fight against pandemic, a political party offering cure as a lolly-pop for votes.

Mind it, this offer of vaccine for vote has been made by none other than the current finance minister of the union of India. So, please understand the financial logic also behind it. To rub salt in the wounds of already scared and depraved Indians, the IT head of BJP, has converted this entire narrative into a Centre Vs State in financial terms. Centre would provide the vaccines at subsidised rate to state govts and they can then decide whether to charge their people or not. Just imagine, we in India live by the constitution, which grants right to life as its first assurances. And the ruling party at the centre, makes that condition to centre – state relations. This denotes the value for life, that India political parties ascribe to when it come to the people of India.


Now let’s turn our focus of the numerous poll manifestos or the poll promises of the parties putting their best foot forward in Bihar elections.

Since the year 2000, Nitish Kumar and BJP have been offering jobs to the people of Bihar as poll promise. After a 7-day government in 2000, Nitish Kumar has been the Chief Minister of Bihar for 15 years. And even now, jobs are on offer. Jobs via fishery, jobs via agricultural reforms, jobs in state government departments and jobs as temporary teachers. Just a pointer here. More than 2 lakh posts in various government departments have not been filled since 2010. No recruitment have taken place, and again jobs with state government have been promised by the BJP. Hilarious !!

When RJD leader Tejashwi Yadav offered 10 lakh jobs, BJP leader Sushil modi and CM Nitish Kumar scoffed – “Where is the money for the jobs dear, will you get it from jail”. Now when BJP offers 19 lakh jobs, I ask them – “Where is the money, honey?” And the next line is, “if you could provide jobs to people, why didn’t you over the past 5 years”.

In the manifesto issued by all parties, there is no mention of industrialisation of Bihar. There is talk of Fishery, Agro-based business, Cold Storage chains, Modernisation of Agriculture – but no industrialisation. Now, let me dwell on this a bit. Since 1995, Bihar has not seen any industrial development in the state.

For 15 years, all businesses fled from Bihar. Lalu and Rabri, ensured that the entire state turned into a Gaushala. And that’s what it is even today. For 15 years, Nitish Kumar has been leading the state. Initially, Nitish Kumar sought investment through industrial summits. Business tycoons came, saw and announced projects.

But when it came to providing infrastructure, the Chief Minister chickened out. Bihar is the only state which doesn’t help industry in acquiring land, providing glitch free transport, providing a semblance of law & order, providing for continuous power supply and assuring hassle free economic environment. Because, all these were missing under Lalu Prasad and Rabri Devi tenure and continue to be missing after 15 years of Nitish Kumar, plus BJP reign. So, pray tell me, which industrialist of his salt would invest in Bihar. This is reason, one finds a Bihari labour in all states irrespective of the distance from home.

Volumes could be penned down on the poll promises of the varied political parties, but the fact is, none of the offer any solution to the backwardness, listlessness, joblessness of a common Bihari. From education to basic medical services, Biharis have to travel hundreds of kilometres to different states. Even to buy decent sarees for marriage, an average Bihari family rushes to Benaras. Bihar is so seeped in a state of distress, that even distress might find it easy going, else where. The moot question looming large in front of Bihar is – Can Bihar Ever Change?

(Disclaimer: The opinions expressed within this article are the personal opinions of the author. The opinions do not reflect the views of India TV)