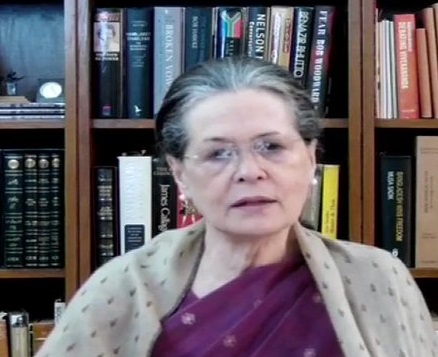 Congress president Sonia Gandhi on Tuesday lashed out at the Nitish Kumar government, accusing it of ‘high on power and ego’. In a video message released a day before the state goes to the polls for the first phase, she urged people to vote for the Mahagathbandhan (grand alliance) which comprises Congress, RJD, and Left parties. Sonia said that the grand alliance government will build a “new Bihar”.

“Dear my brothers and sisters of Bihar. Government in Bihar has gone astray. High on power and its ego, current Bihar government has deviated from its path. Neither their saying nor doing is good. Labourers are helpless, farmers are anxious and youth are disappointed. Public is with Congress Mahagatbandhan and it is the call of Bihar,” Sonia said in her 5-minute-long addres.

Sonia said that Bihar is in crisis today, adding that “dalits, backward people are being subjected to continuous oppression”.

“The governments in Bihar and the Centre are ‘bandi governments’. They only know notebandi, lockdown leading to economic crisis,” she said.

The Congress is contesting on 70 of the 243 Assembly seats. Sonia has not addressed any public rally in the state so far. The eastern state is witnessing a close contest between the ruling NDA and the grand alliance of opposition parties. While the NDA is led by incumbent CM Nitish Kumar, the grand alliance is headed by RJD supremo Lalu’s son Tejashwi Yadav.

Among the prominent parties while RJD is contesting on 42 of the 71 seats in the first phase, JD(U) candidates are in 41 constituencies, BJP (29), Congress (21) and LJP nominees are in fray at 41 places.

The second and third phase of polling will be held on November 3 and November 7, respectively. The results will be declared on November 10.