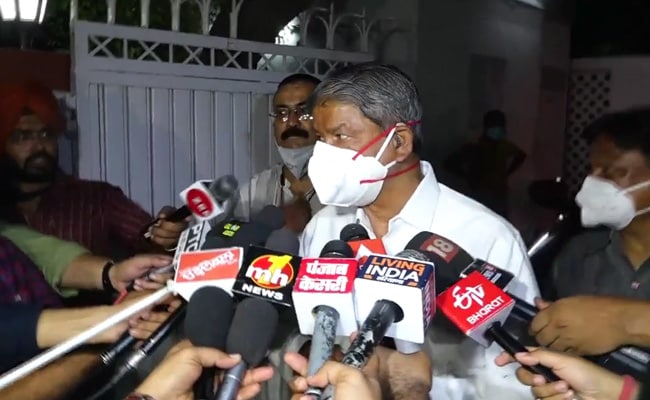 “The BJP has not solved the problems of Uttarakhand,” Congress leader Harish Rawat said. (File photo)

The Congress on Saturday hit out at the BJP leadership, saying instead of ushering in development, it has thrown Uttarakhand into political instability and betrayed its people by repeatedly changing chief ministers.

BJP leader Tirath Singh Rawat resigned as the state’s chief minister on Friday after holding the post for less than four months. He had replaced Trivendra Singh Rawat in March.

The BJP has insulted the “devbhoomi” of Uttarakhand, and Prime Minister Narendra Modi and its president JP Nadda are responsible for the current situation, the Congress alleged.

Starting with Nityananad Swami, the BJP will have eight chief ministers in the state, senior Congress leader Harish Rawat said and added that in the latest four and a half years of the BJP’s rule in Uttarakhand, there will be three chief ministers.

The Congress condemns the BJP for insulting the state and its people by not doing anything to solve its problems, he said.

“The BJP’s high drama in Dehradun is an insult to the people of Uttarakhand. The prime minister had promised to give a double-engine government, but the state only received different chief ministers and no development,” Harish Rawat, a former chief minister, said.

“The BJP has not solved the problems of Uttarakhand and has added to the rising unemployment in the state,” he told reporters.

It has “insulted the ”devbhoomi” (land of Gods) of Uttarakhand and the Congress condemns the BJP for giving political instability”, Harish Rawat said.

Congress chief spokesperson Randeep Surjewala said the BJP has betrayed the people and Prime Minister Modi and Nadda are responsible.

“This is BJP’s example of lust for power, political instability, sharing fruits of power and failure of leadership. Instead of serving the people of Uttarakhand, they tried to distribute power, and PM Modi and JP Nadda are responsible for this. The BJP has brought Uttarakhand to such a turn where power means only sharing its fruits and nothing else,” he alleged.

Mr Surjewala said in 2017, the people of Uttarakhand elected the BJP, but in five years instead of serving them and ushering in development, the BJP only “looted its resources”.

“This is BJP’s ”chair-changing game” going on in ”devbhoomi” Uttarakhand,” he said referring to the change of chief ministers in the state.

“Modi ji-Nadda ji have betrayed the interests of the people of ”devbhoomi” by pushing Uttarakhand into political instability, loot of power and ”chief minister swap scheme”,” Mr Surjewala said.

Uttarakhand Congress chief Pritam Singh said the people are hurt by the BJP”s attitude towards the state, where unemployment is rising and people are left to fend for themselves.

AICC secretary and in-charge for Uttarakhand Congress Devendra Yadav said the people of the state are waiting to throw out the BJP as it has given nothing to the state, except “loot its resources”.
The Uttarakhand BJP legislature party will meet on Saturday afternoon to elect its new leader following Tirath Singh Rawat”s resignation.

The legislature party meeting will begin at the BJP headquarters at 3 pm in the presence of central observer Narendra Tomar and BJP general secretary in-charge of Uttarakhand Dushyant Kumar Gautam. All the MLAs have been asked to be present at the meeting.