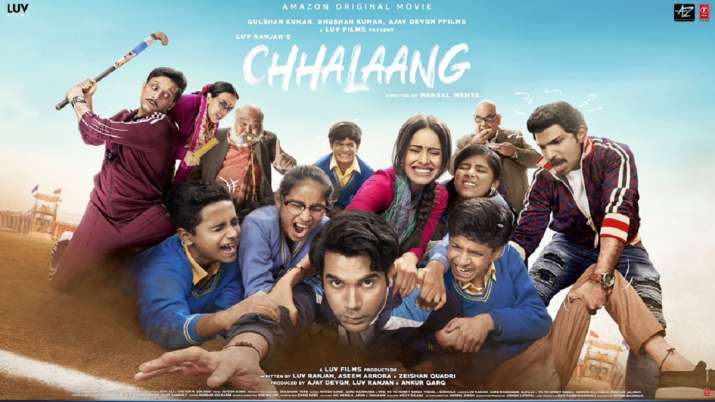 The trailer of Hansal Mehta directorial Chhalaang featuring Rajkummar Rao, Nushrat Bharucha and Mohammed Zeeshan Ayyub in the lead roles was out on Saturday.

Chhalaang appears to be story with elements of romance and comedy until Zeeshan Ayyub, who has been appointed as a co-PT Teacher and Rao’s senior in the same school, enters. Rao lock horns with Zeeshan Ayyub (Singh) over the job of PT teacher, and the movie takes a U-turn, where the duo indulge in competition each other both personally and professionally. Nushrat could be seen as the love interest of the two.

In the three-minute long trailer, we see Montu (Rajkummar Rao), falls in love with Neelu (Nushrat Bharucha), who is recruited as a computer teacher at his school. He starts liking her and tries to woo her in every possible way. But the second half of the trailer shows that Montu, who loves his job, cannot sacrifice his pride for it. He could be heard saying “Ma’am Naukri Pyaari Hai, Par Izzat Thodi Zyada Pyaari Hai.”

However, Montu keeps an offer of a competition to prove himself better from Singh or rather a competition for pride and starts training his students for a tough the same. Now, the competition between these two coaches will decide the game.

Announcing the date of release, Hansal Mehta Tweeted: “‘Tis the season of releases. Here is the trailer of #Chhalaang. #ChhalaangOnPrime, premieres this Diwali, Nov 13 on @PrimeVideoIN”

.
Ila Arun looks impressive as the school principal while Satish Kaushik and Saurabh Shukla also make an appearances in the trailer. Chhalaang has been directed by Hansal Mehta and co-produced by Ajay Devgn, Luv Ranjan and Ankur Garg.

The film will stream on Amazon Prime Video from November 13.