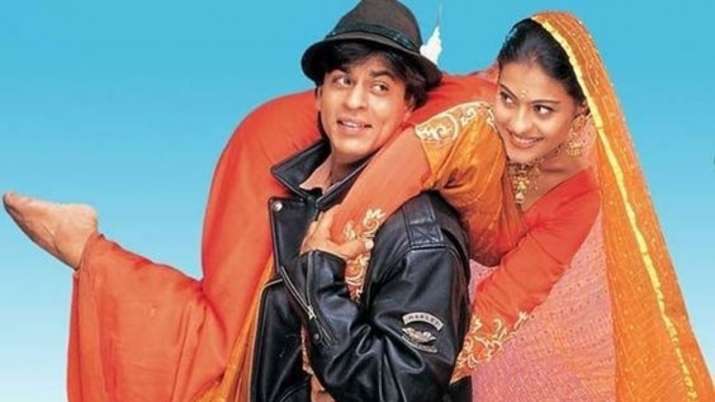 Shah Rukh Khan and Kajol starrer Dilwale Dulhania Le Jayenge has turned 25 today. The love story is one of the most iconic films of Hindi film industry and has earned huge popularity not only in India but across the world over the years. SRK and Kajol are also the most loved on-screen pair and share a very close bond in real life. When in the season two of filmmaker Karan Johar‘s chat show Koffee With Karan, the two actor made an appearance on the couch along with Rani Mukerji, they were asked about their reaction if after 10 years ago, Kajol’s daughter Nysa would elope with SRK’s son Aryan Khan. Keeping up with his witty one-liners, SRK stole the show with his reaction.

Host Karan Johar, “10 years from now, if Aryan Khan eloped with Nysa, you would..” Even before Kajol could reply, he said, “It’s sabotage!” leaving everyone in splits. Taking DDLJ reference, Kajol answered, “I would say, ‘Dilwale Dulhe Le Jayenge'” However, SRK did not look much impressed. When KJo asked him about it, he replied, “Mereko joke samajh nahi aaya (I did not get the joke). I’m too scared about if she gets related to me… I can’t think!”

The Koffee With Karan episode aired in 2007 and fans loved SRK, Kajol and Rani’s chemistry and bond. While SRK’s role as Raj in DDLJ is still considered one of his best, the superstar revealed that he was skeptical about his ability to pull off the romantic scenes in the ever-popular love story.

“I was told by many people that I looked unconventional, very different from what the perception of a leading man was. I did feel, maybe, not being handsome enough — or, as they called it back then, ‘chocolaty’ — would make me unsuitable for romantic roles. Also, I am very shy and awkward with ladies, and I didn’t know how I would say all the loving, romantic bits,” Shah Rukh recalled.

“I have to admit, for someone who doesn’t like mushy and romantic films, the scenes Kajol and I did make me feel fuzzy and warm! There, I said it,” he smiled.

Released on October 20, 1995, the Aditya Chopra directorial, which starred SRK and Kajol, the film tells the love story of Raj (SRK) and Simran (Kajol) who live in the UK. The film kicked off the trend of NRI romances on the Bollywood screen, and also reorganised romance in Hindi cinema forever.