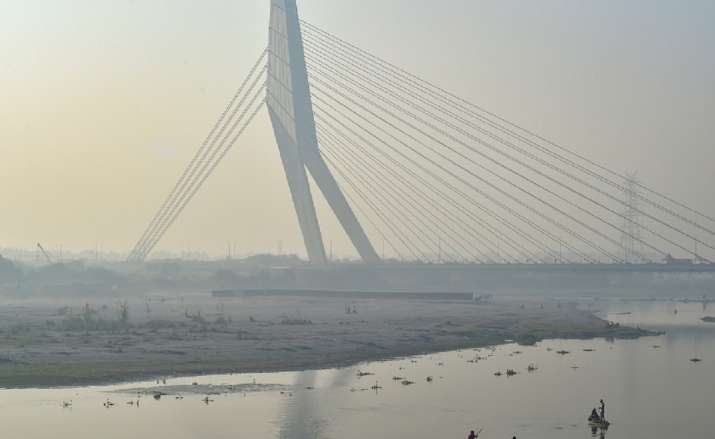 The air quality in the national capital witnessed a marginal improvement on Tuesday morning due to favourable wind speed, however, it continued to remain in the “poor” category.

According to SAFAR, the Ministry of Earth Sciences’ air quality monitor, the air quality index (AQI) is likely to slip to the “very poor” category by Wednesday due to a change in the wind direction and a reduction in the wind speed.

SAFAR said a change in surface wind direction is expected by early Wednesday which is “likely to bring calm surface wind conditions, leading to low ventilation and deterioration of AQI”.

“Very poor AQI is predicted for Wednesday and Thursday,” it said.

The stubble fire count around Haryana, Punjab, and neighbouring regions stood at 1,090 on Monday. The share of farm fires in Delhi”s PM2.5 pollution stood at 10 per cent.

“Though transport-level wind direction is favourable, an increase in the wind speed and local surface winds led to a decrease in stubble (burning) contribution in Delhi”s PM2.5,” SAFAR said.

Delhi Chief Minister Arvind Kejriwal has requested Union Environment Minister Prakash Javadekar to hold monthly meetings with the chief ministers of Delhi, Punjab, Haryana and Uttar Pradesh to curb air pollution, saying there is a lack of political will to address the problem of stubble burning.

In a virtual press briefing, he said the affected states have been unable to find a solution to stop stubble burning and prevent air pollution. “I believe pollution due to stubble burning can be controlled in a short span of time. But a lack of political will is visible in doing that.”

Environment Minister Gopal Rai said the Delhi government will deploy 2,500 environment marshals across the city to generate awareness about its recently launched anti-pollution campaign, “Red Light On, Gaadi Off”.

He also said a meeting of environment ministers of Delhi, Punjab, Haryana, Rajasthan and Uttar Pradesh with the Centre must be held every 15 days to discuss matters pertaining to pollution and stubble burning.

Such meetings will help in improving coordination between the states, he said.

Be ready to close non-complying plants, EPCA tells Haryana, UP

The Environment Pollution Control Authority (EPCA) on Monday asked the Uttar Pradesh and Haryana governments to be ready to close thermal power plants that do not meet the standards laid down in 2015.

In two separate letters, EPCA chief Bhure Lal asked the two state governments to review the preparedness for closing thermal power plants and to inform EPCA of this review as well as the steps that will be taken to ensure compliance with the necessary shut-down during the peak winter period.