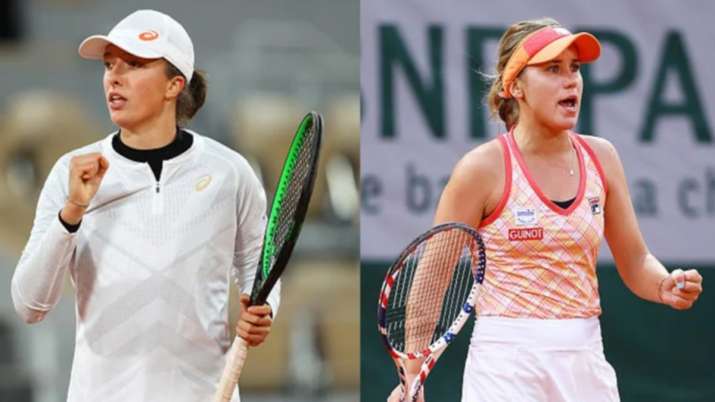 A little more than four years ago in Paris, Iga Swiatek beat Sofia Kenin 6-4, 7-5 in the third round of the French Open junior event.

“I remember I lost. I don’t remember how I played,” Kenin said when asked about the only encounter between the two. “But definitely I can say I was not as comfortable on clay as I am now, as I started to feel last year. … Of course, we’re both different players now.”

And the stakes in their second matchup at Roland Garros are considerably different from that 2016 meeting, too: Kenin, a 21-year-old from Florida, and Swiatek, a 19-year-old from Poland, will face each other Saturday in the French Open women’s final.

Swiatek (pronounced shvee-ON’-tek) is No. 54, making her the lowest-ranked woman to get this far at the tournament since the WTA computer rankings began in 1975. She seeks her first Grand Slam title; in six previous appearances, her best showing was the fourth round.

“I mean, I have to figure out what she does. She’s had a great two weeks here. She’s had some great results, playing some really good tennis,” said Kenin, who eliminated two-time Wimbledon winner Petra Kvitova in the semifinals. “I know that I’m also playing well.”

Kenin, who is seeded No. 4, is bidding for her second big trophy of the season, after triumphing at the Australian Open in February, part of a 16-1 mark at the majors in 2020.

Kenin needed to get through three sets to win four of her half-dozen matches in Paris, an indication of some occasional lapses in form, perhaps, but also of her boundless resilience and grit.

“Definitely feisty,” is the way she put it.

Swiatek’s progress through the surprise-filled draw over the past two weeks has been as impressive as can be.

If the chill and rain of the autumnal setting — the French Open was postponed from May-June to September-October because of the coronavirus pandemic — or the lack of loud crowds — only 1,000 fans are allowed on the grounds each day, also on account of COVID-19 concerns — or the dearth of match play — the women’s tour returned from a five-month hiatus in August — bothered others, those factors were irrelevant to Swiatek.

Not only hasn’t she dropped a set so far — no woman has won the title in Paris without ceding at least one since Justine Henin back in 2007 — but Swiatek allowed her six opponents to combine for just 23 games in 12 sets.

The lopsided results included 6-1, 6-2 victories over both 2018 champion Simona Halep and 2019 runner-up Marketa Vondrousova, and a 6-3, 6-2 win over 2014 Wimbledon finalist Eugenie Bouchard.

“There’s a reason why I was so efficient. Really, I’m staying super-focused,” said Swiatek, who travels with a sports psychologist. “I’m, like, not letting my opponents to play their best tennis. So I hope I’m going to do that on Saturday.”

She is young enough, remember, that she recently finished high school.

Swiatek says she needs to figure out whether to continue to pursue her education or stick to professional tennis.

“Well, right now it’s going to be hard to make a decision to go back to studying, because I feel like really I can achieve big things. I just want to focus on that,” Swiatek said. “But really, I’m only 19, so a lot can change during a few years. … Maybe I’m going to be, like, hungry for knowledge.”