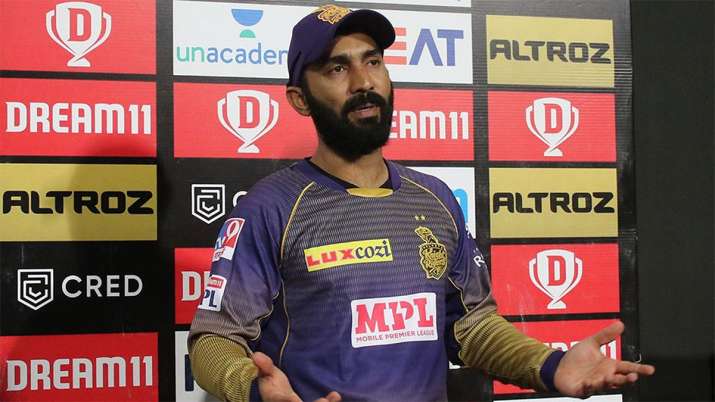 Former Kolkata Knight Riders captain Gautam Gambhir opined that the talks about the presence of Eoin Morgan, who recently won the World Cup for England at home last year, in the Kolkata Knight Riders squad added pressure on Dinesh Karthik. Left surprised by the decision, he also felt that if that was the point that KKR management should have made Morgan the captain before the start of the campaign.

It was on Friday afternoon, right before KKR’s return game against their bogey team Mumbai Indians in Abu Dhabi, Karthik had stepped down from his role after leading the side for two and a half-season, in a bid to focus on batting. KKR immediately announced that Morgan would take over the reins for the remainder of the season.

“Li’ll surprised. He’s obviously leading KKR for the last 2 and a half years. You don’t do it in the middle of the season. KKR is not in that bad a position that someone needs to change a captain, so yeah little bit surprised,” he added.

KKR under Karthik in IPL 2020, won four and lost three of their seven games to stand fourth in the points table. Overall, he had led KKR to 19 wins in 37 IPL matches.

“If KKR wanted to make this change, they should have done it at the start of the competition. If you are talking so much about a World Cup-winning captain being there in your team puts pressure on someone like Dinesh Karthik then why not just give it to Morgan straightaway, why put so much pressure on Karthik?

While Gambhir understands Karthik’s decision behind stepping down from the responsibility, he feels that it was take after he started getting “fillers from the management.”

“My point is, it sounds very good when someone says that I want to concentrate on my batting but the truth is, you start getting fillers from the management whether they are happy or not, so it’s very unfortunate,” he further opined.

The captaincy failed to change KKR’s fate as they lost their first game under Morgan, losing bu eight wickets at the Sheikh Zayed Syadium.