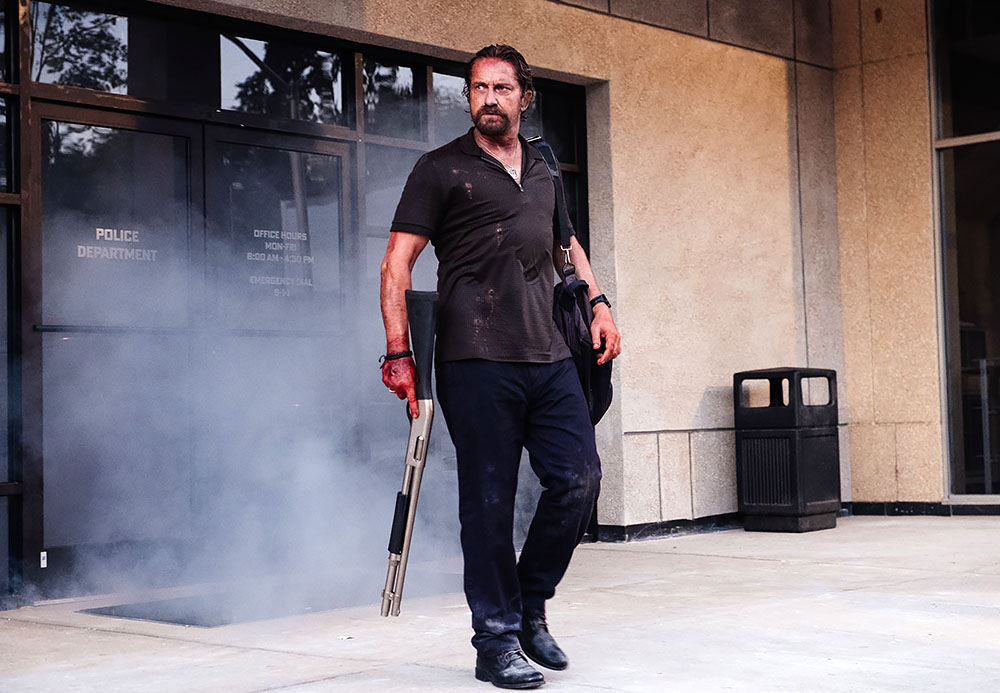 Director Joe Carnahan’s latest high-energy actioner easily fulfills the genre’s requirements of blood, guts, bullets and octane, to reference the title of the director’s first film. Copshop delivers an ultraviolent game of cat-and-mouse between a ruthless hired killer and his would-be target, with a determined rookie cop caught in the middle. The ’70s-style synth-heavy musical score, of which Lalo Schifrin would be proud, adds to the enjoyable grindhouse aesthetic.

That the cat-and-mouse game occurs largely in an expansive Nevada police station is one of the cleverly amusing conceits of the screenplay by Carnahan and Kurt McLeod. Featuring the most violent mayhem in such a setting since Assault on Precinct 13 and The Terminator, the film takes place in the Gun Creek Police Department. There, quick-thinking con artist Teddy Murretto (Frank Grillo, apparently competing with Eric Roberts for the record for most onscreen appearances in a single year) has managed to get himself arrested by sucker-punching a female cop, Valerie (Alexis Louder). Teddy was hoping to avoid the clutches of veteran hitman Bob Viddick (Gerard Butler), but his plan is foiled when the equally clever killer gets himself hauled in on a drunk driving charge and is placed in a cell next to his quarry.

Butler and Grillo are fine, but it’s Alexis Louder who kicks ass.

Meanwhile, it’s obvious from the suspicious behavior of one of the cops (Ryan O’Nan) that something bad is about to go down, possibly connected to the recent murder of a Nevada attorney general.

The only thing preventing Bob from killing Teddy, besides the cell he’s locked in, is the ultracompetent Valerie, who quickly proves that she’s as much of a badass as any of the criminals she encounters. But even she is unable to prevent all hell from breaking loose upon the arrival of the deceptively named Anthony Lamb (Toby Huss), a maniacal killer armed with automatic weapons who enters the police facility and proceeds to kill practically everyone with whom he comes into contact.

Butler and Grillo, the latter amusingly sporting a goatee and a man bun, are both fine in their testosterone-fueled roles, displaying real chemistry even as their characters are attempting to kill each other. But the picture is stolen by Louder. She brings a deadpan humor to her endlessly resourceful cop, who has the coolness to reconfigure a door passcode while under heavy automatic fire, reset a fellow cop’s dislocated jaw, perform an emergency tracheotomy, and apply first aid to her own potentially fatal wounds.

Equally terrific is Huss, a veteran character actor who clearly knows that he’s been given a breakout part and has every intention of making the most of it. At one point, Viddick points out that there’s a difference between a professional killer and a psychopath, adding that Lamb clearly falls into the latter category. Punctuating each cold-blooded murder with an oddball observation or wisecrack, the folksy Lamb seems to be having the time of his life, and his enjoyment is perversely infectious.

Spotting Teddy’s man bun, Lamb cracks, “You look like Tom Cruise in that samurai picture that nobody watches.” It’s the sort of pop culture-riffing line that now seems de rigueur for these sorts of offbeat crime movies, as is the Tarantino-like debate between Teddy and Bob about the definition of “déjà vu.” At times the dialogue becomes too clever for its own good. But Carnahan smartly never lets it overshadow the fast-paced violence, which should keep rabid action movie fans happy. Copshop is ridiculous on almost every level, but damn if it isn’t a whole lot of fun.