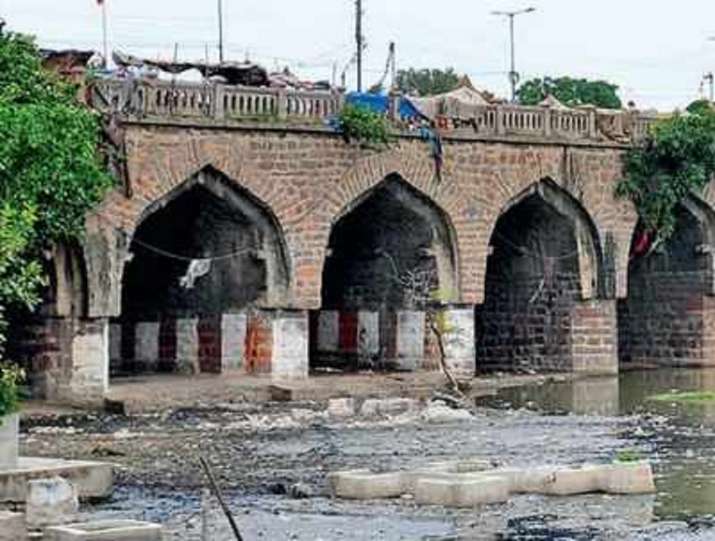 The famous bridge across the swollen Musi river – Purana Pul, was shut for traffic after cracks were noticed on one of the pillars. Police said traffic coming from Hussaini Alam and Bahadurpura side and from Karwan and Ziaguda on the other side was diverted. The traffic police barricaded the bridge on both sides late Sunday after one of the pillars was found damaged. Some of the commuters also complained of vibrations. The Purana Pul is a key link between the old city and areas like Karwan, Dhoolpet, Ziyaguda, Mehdipatnam, Asifnagar and Tappachabutra on the other side.

The closure of the bridge led to traffic jams on roads on either side of the river. As the traffic was diverted towards the parallel Musallam Jung bridge, it also led to traffic snarl on that bridge which connects the High Court and surrounding areas to Begum Bazar on the other side.

Purana Pul is the third bridge across Musi to be closed for traffic following heavy rains and flash floods that battered the city twice in the last week.

Chaderghat causeway and Moosarambagh causeway across the river were already shut for commuters after they were flooded.

The Musi river is already in spate due to the discharge of water from the Himayat Sagar reservoir upstream. For the second time in a week, its gates were opened on Sunday following Saturday night’s heavy rains to let surplus water into the river.

According to Hyderabad Metro Water Supply and Sewerage Board, the level at Himayat Sagar is 1,762.80 against its Full Reservoir Level (FRL) of 1763.500 feet.

The officials say this is the first time after 20 years that Musi is witnessing floods.

It has inundated many areas along the river banks, especially at Chaderghat and Moosarambagh.

Historians say thousands of people were killed in the great deluge of September 28, 1908, when the Musi river burst its banks following heavy rainfall.

It was after this devastation that then Nizam of Hyderabad State had built Himayat Sagar and Osman Sagar upstream to control the floods. These reservoirs were the only sources of drinking water until a few years ago.