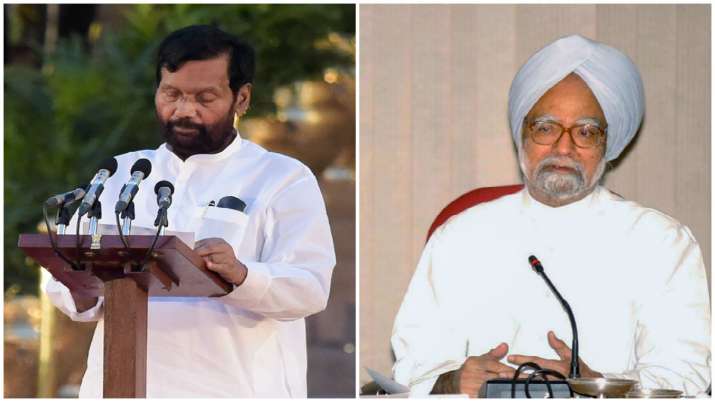 Former prime minister Manmohan Singh on Friday said the country has lost one of the greatest Dalit and socialist leaders in Ram Vilas Paswan. Paswan (74), the Union Minister for Consumer Affairs, Food and Public Distribution, died at a hospital in Delhi on Thursday, days after he underwent a heart surgery.

Gandhi said Paswan raised voice for the most marginalised sections in society and left a lasting imprint on politics and public service in both Bihar and the country.

In a letter to Chirag Paswan, son of the late Union minister, Manmohan Singh described him as an important Dalit face in the central government.

“In his death our country has lost one of its greatest Dalit and socialist leaders, who always stood for the cause of the poor and downtrodden people of the society,” Singh said in his condolences.

“Ram Vilas Paswan ji was a very important Dalit face in the central government, of many parties. I have very warm recollections of my association with Shri Paswan ji as a member of the UPA Government which I led in 2004.

“The veteran socialist leader, Paswan ji was also a very efficient administrator who worked very closely with me as Minister of Chemicals and Fertilisers, and also served as minister in various ministries,” the former PM said.

Singh said Paswan was a mass leader which is evident from the fact that he won Parliament elections with a record majority from his constituency.

He said Paswan was also a leader who was loved and respected by all with whom he came into contact with, irrespective of their political leniency.

Rahul Gandhi, in a letter to Chirag Paswan, said he was deeply saddened by the sudden demise of his father.

“We have lost a veteran leader who left a lasting imprint on politics and public service in both Bihar and our nation.

“In an illustrious public life spanning over five decades, he was the voice of the most marginalised sections of our society and defended the rights of the poor and the vulnerable,” he said in his letter.

Gandhi said as a Member of Parliament and Union minister, Paswan voiced the interests and concerns of the poor with passion.

“His unwavering commitment to social justice and equality is particularly relevant in these times. His enduring legacy will continue to inspire people dedicated to public service,” the Congress leader added.