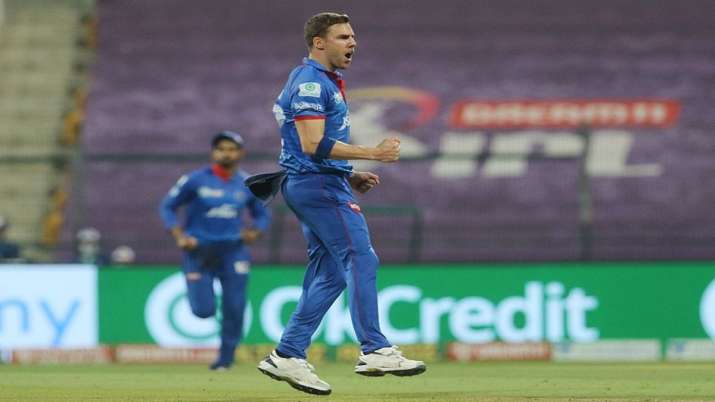 Securing a top-two finish on their way to playoffs, Delhi Capitals (DC), led by Anrich Nortje’s three-wicket haul, thumped Royal Challengers Bangalore (RCB) by six wickets at Abu Dhabi on Monday. Nortje was brilliant with the ball, especially at the end of the first innings. He finished with figures of 3/33 in his four overs, which included two vital wickets of Devdutt Padikkal and Chris Morris in the same over.

RCB managed to post 152 runs on the board but it wasn’t enough to put any pressure on Delhi’s batting unit. Stepping up to the occasion, Ajinkya Rahane and Shikhar Dhawan stitched an 88-run stand to bolster DC’s run-chase. While Rahane scored 60 off 46, Dhawan hit a 41-ball 54. The two kept scoring boundaries to shuffle the scoreboard and keep the required run-rate in check.

In the end, DC steered past the finishing line with six deliveries to spare and paved their way into the playoffs. DC will now face defending champions Mumbai Indians (MI) in Qualifier 01. For his impressive show with the ball, Nortje was awarded Player of the Match where he revealed the plan of the bowling attack.

”I said it time and time again, it’s just about doing the basics right and wasn’t about something special from one guy. Coming into this game, small things started feeling better and I think those small things, once you get that right, you get your rhythm. We were thinking to make them hit to the bigger boundary and stick to our plans against each batsman,” Nortje said in the post-match interview.

”There was little bit dew at the end of our innings and we tried not to be predictable. Yorker would have been the obvious option and we wanted to change it and see how it goes and wanted to hit the hard length. Having a bit of extra pace always helps. All ready for the playoffs,” he added.