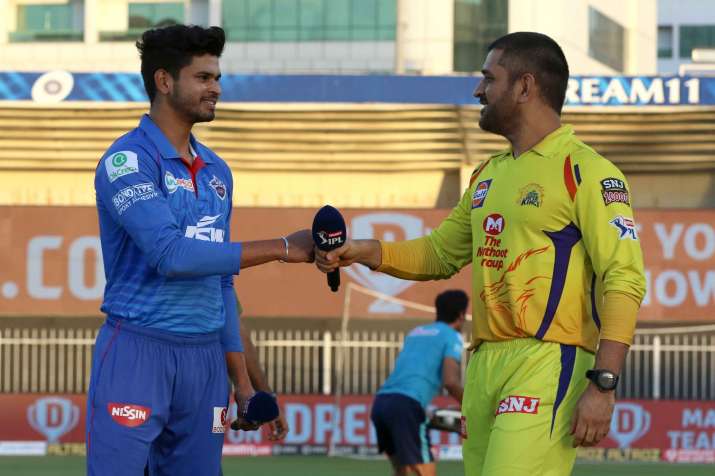 Chennai Super Kings skipper MS Dhoni has opted to bat first against Shreyas Iyer-led Delhi Capitals in Sharjah on Saturday. The skipper has decided to bring in under-fire Kedar Jadhav back in the line-up and has dropped spinner Piyush Chawla to make room for an extra batsman.

After winning the toss CSK skipper explained that lack of grass on the pitch was the reason behind his decision to bat first.

“There’s nothing on the surface, there’s no grass. This looks like a fresh wicket. The question is how much it will slow down as the game progresses,” Dhoni said.

Shreyas Iyer, on the other hand, took the decision of not disturbing his playing XI  after the win over RR earlier this week and updated that he is doing fine after an injury in the last game.

“It’s far better (injury) now, thankfully it was just bruised. I wanted to play this game. We will be giving him (Pant) one more game rest so that he comes back really strong in the next one. We are playing with the same team. I wouldn’t like to point out on the negatives,” he said.

Poll: Here’s what India thinks about the new COVID vaccine –...

Babar Azam hopes to counter tough Proteas in own conditions |...

Exclusive! 3 years of ‘Padmaavat’: Anupria Goenka reminisces the time when...