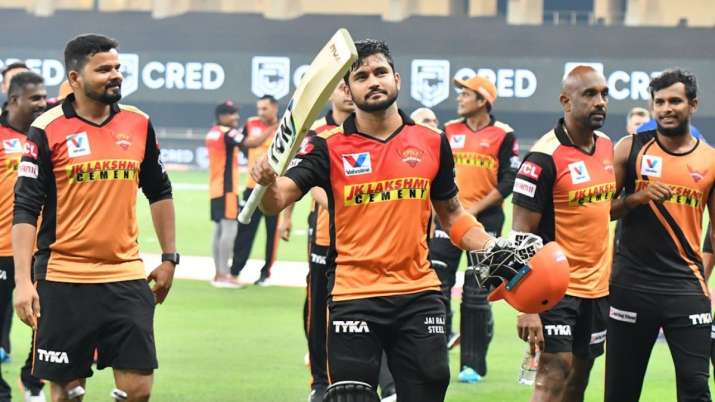 Sunrisers Hyderabad registered a convincing eight-wicket win over Rajasthan Royals on Thursday. With the win, SRH acquired two crucial points and jumped to fifth spot on the points table. Chasing a tricky target of 155, Manish Pandey played an astonishing knock of unbeaten 83 off 47 balls to guide SRH to crucial victory with 11 balls overs to spare at the Dubai International Cricket Stadium.

Pandey slammed 4 fours and 8 sixes during his match-winning knock. The 31-year-old shared a 140-run stand alongside Vijay Shankar, who also scored unbeaten 52 off 51 balls, laced by six boundaries.

Archer gave RR a strong start to their defence, dismissing SRH openers David Warner and Jonny Bairstow in his first two overs. SRH were on 16/2 wickets when Shankar joined Pandey in the middle. Smith took Archer off the attack after which Pandey went on the counter and shifted momentum back his team’s way.

Earlier, put in to bat, Robin Uthappa looked in rampaging form, hitting the first four and six of the innings. He quickly raced to 19 off 13 balls. However, his time in the middle was short-lived. After Ben Stokes (32) hit Holder for back-to-back boundaries in the fourth over, the West Indies skipper effected Uthappa’s run out as the Indian was late to turn back at the non-striker’s end.

Later, a 56-run stand between Stokes and Samson was broken in the 12th over by Holder. Samson, who had reached his highest score since the 85 against Kings XI Punjab in RR’s second match of the tournament, was bowled by a slow off-cutter, after pulling the previous delivery over midwicket for a huge six.

Playing his first match of the tournament, Holder (3/33) came up with an impressive bowling effort while also affecting a run out to destabilise the RR innings. Rashid Khan (1/20) and Vijay Shankar (1/15) picked a wicket each.

The fans on Twitter hailed the efforts of Pandey, Shankar and Holder after the dominating win. While Rajasthan Royals faced the wrath of trollers.