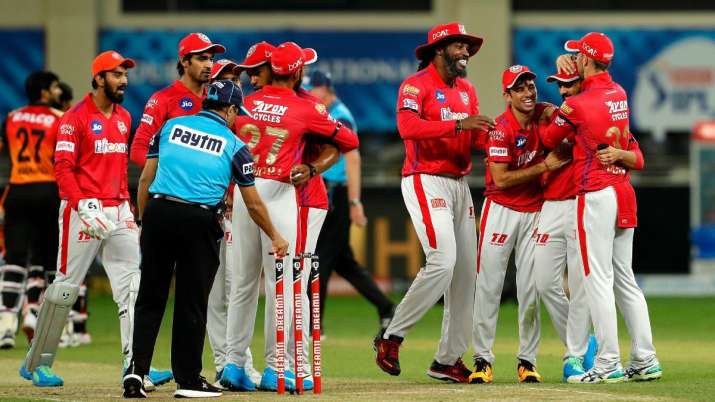 Kings XI Punjab registered a sensational win over Sunrisers Hyderabad to keep the Play-off hopes alive. With the 12-run win, KXIP jumped to fifth on the points table. Chris Jordan was the star of the match for his team as he scalped three crucial wickets for KXIP while defending the target of 127. Jordan also took two crucial catches to put SRH on backfoot.

In the low-scoring thriller, SRH batsmen choked in the later stage of the innings and lost their last seven wickets for just 14 runs in Dubai. Chasing the target, Openers David Warner and Jonny Bairstow provided a great start with a 56-run stand in 6.2 overs, but after the skipper’s departure, nothing went in SRH’s favour.

KXIP skipper KL Rahul (27), Mandeep Singh (17) and Chris Gayle (20) all got starts but their innings never got going as they failed to grab the momentum.

Rashid Khan (2/14) then went through the defence of captain Rahul in the first ball off the next over as KXIP slumped to 66 for three. Boundaries and sixes were hard to come by and KXIP batsmen’s struggle can be gauged from the fact they failed to find the fence for more than 11 overs, which was finally broken by Nicholas Pooran in the 19th over.

The fans on Twitter brutally trolled SRH after the humiliating defeat, while KXIP got praised for their sensational victory.

#KXIPvSRH
Everyone blaming Vijay Shankar for losing the match.

Manish Pandey from a corner: pic.twitter.com/RsRRuN8pvm