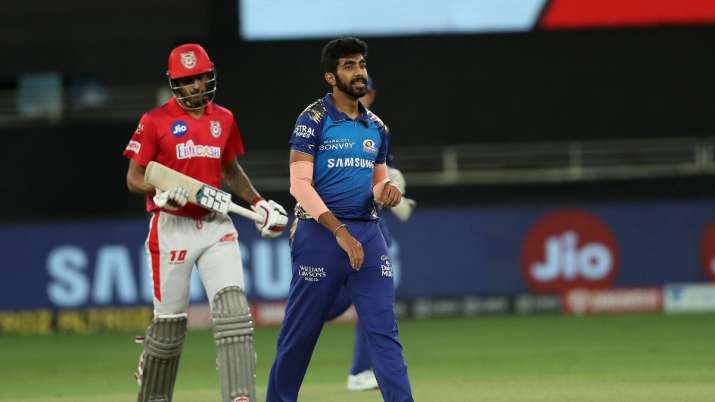 After the scores were levelled at the end of the regulation two innings of 20 overs each, the contest slipped into the Super Over. However, this decider, too, ended in a tie, and it took another Super Over decider the winner. The second time around, ‘Universe Boss’ Chris Gayle effectively sealed the win with the first-ball six.

Mumbai Indians’ Kieron Pollard, who played an impressive 12-ball 34-run knock in the first innings, and then scored an unbeaten 8 in the second Super Over, said that even as the side lost the game, it played a good game of cricket.

“We played a good game of cricket. Batted well to get to 170-odd and bring it to the last over. They were batting well and could’ve gone on to win the game in the 18-19th over, but we played a good game,” Pollard said in the post-match press conference.

MI are yet to register a win in Dubai in the tournament so far. Pollard, however, remains unfazed.

“It’s cricket, the same 22 yards. We lost the two games in Super Over. It’s just a matter of pin-pointing the erros and improve as a team. Once we do that, we come back stronger as a unit. Let’s not take away the fact that we’ve been playing some very very good cricket,” said Pollard.

Jasprit Bumrah bowled impressively in the first Super Over of the game, restricting the KXIP to five runs while cleaning Nicholas Pooran and KL Rahul‘s stumps. Pollard said that Bumrah has taken over the mantle from the side’s veteran fast bowler Lasith Malinga.

“He’s a world class cricketer. He has been number one in a couple of formats for long period of time. He’s gone leaps and bounds for us at Mumbai Indians. We have the comfort in him. Couple of years ago, we had a fit Lasith Malinga and now he has taken over the mantle now,” said the Windies all-rounder.

Pollard hopes for a better response from the side after the setback.

“Every time we step on field is to improve and do better. We will look back, analyse the game, the management team will sit back, come up with a better plan and get the two points. I know you guys are accustomed to us winning games, so we will try to go ahead and execute our plans,” said Pollard.