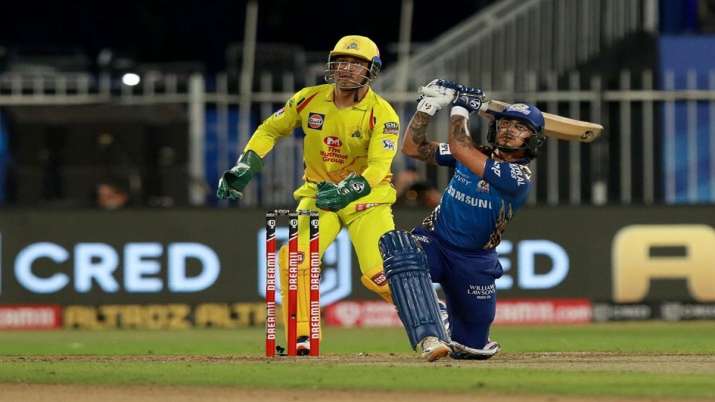 Continuing their impressive run in the on-going IPL 2020, Kieron Pollard-led Mumbai Indians decimated Chennai Super King by 10 wickets at Sharjah to climb up to the top of the points table.

Chasing a modest total of 114, MI sailed past the finishing line with ease. In the absence of their regular skipper and opener Rohit Sharma, the fresh opening pair of Quinton de Kock and Ishan Kishan stitched a match-winning stand to decimate MS Dhoni‘s men. While Ishan scored  68 off 37, De Kock gathered 46 from 37 deliveries to register a comprehensive victory.

After being put to bat first, CSK suffered a batting debacle after losing initial wickets in the powerplay itself. It all started with Trent Boult trapping opener Ruturaj Gaikwad in the first over of the innings. Jasprit Bumrah, coming into the attack in the second over, turned the tide in MI’s favour by scalping wickets on consecutive deliveries.

His first prey was Ambati Rayudu on the fourth delivery of the over. Trying to play the pull, Rayudu nicked the ball and gave an easy catch to wicketkeeper Quinton de Kock.

After drawing first blood, Bumrah struck CSK with another blow on the very next delivery by dismissing N Jagadeesan. Suryakumar Yadav, standing at wide first slip, made no mistake in pouncing on the catch as Bumrah registered his second wicket of the encounter.

The wicket-losing affair didn’t end there as CSK lost their first five wickets in the powerplay, with the scoreboard reflecting 24/5. Rahul Chahar, in the seventh over, shattered CSK’s last hope by scalping the prized wicket of skipper Dhoni.

Amid CSK’s batting debacle, their young all-rounder- Sam Curran- emerged as their talisman. Curran steadied the sinking ship by stitching a vital 47-ball 52 and steering CSK to a respectable total of 114 runs.

For Mumbai, Boult emerged as their most successful bowler by scalping four wickets off his four overs, followed by Bumrah and Chahar, who pocketed two wickets each.

With this emphatic victory, the defending champions have clinched the top spot with 14 points under their belt. Dhoni’s troops, on the other hand, have now suffered eight defeats in 11 matches. They’re languishing at the bottom position with just six points to their name.

FIH Pro League will be the perfect test ahead of Olympics: Sreejesh | Hockey News – Times of India

FIH Pro League will be the perfect test ahead of Olympics:...