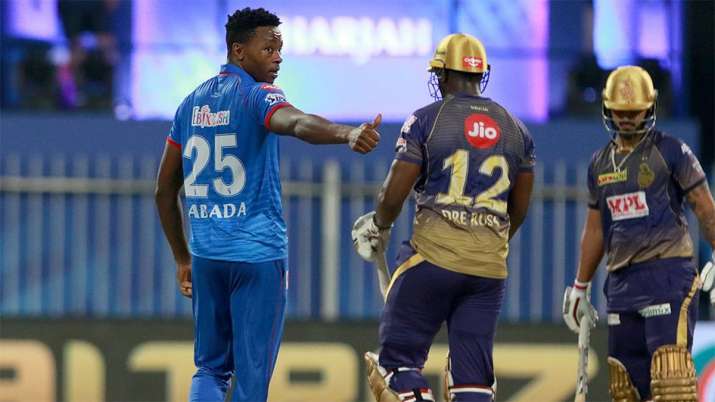 In a battle between two play-off rivals, Delhi Capitals will take on Kolkata Knight Riders will look to consolidate their positions in the top half of the table as they face off in the first clash of Saturday’s double-header.

Both the sides have suffered heavy defeats in their last game and will quickly like to gain the winning momentum to keep their season on track. The victory would mean more to the fourth-placed KKR, who are just two points away from three of the team dwelling in the bottom half of the table. For DC, on the other, hand, two points mean taking the top spot again from Mumbai Indians as both of them locked on 14 points from 10 games at the moment with the latter leading by the virtue of net run rate.

Delhi will be feeling confident about their batting with double centurion Shikhar Dhawan in form of his life, though team’s skipper Shreyas Iyer would hope him and other batsmen at least keep the scoreboard ticking from the other end as that hasn’t been the case in the last two games.

Also, Iyer might have to take a call on opener Prithvi Shaw for the game as the batsman has just managed 11 runs in the last four innings, including two ducks. This could possibly lead to Ajinkya Rahane opening the innings for the first time this season.

As far as Capitals bowling is concerned, purple cap holder Kagiso Rabada would hope his partner in crime Anrich Nortje returns for the game after missing out the Kings XI Punjab game with a nagging injury. This would probably mean all-rounder Daniel Sams be dropped for the game if the IPL’s fastest pacer is fit.

Tushar Deshpande proved too expensive in the last game after an impressive debut and could lose his spot to Harshal Patel for the game.

KKR, on the other hand, are heading into the contest after an embarrassing batting performance against Royal Challengers Bangalore.

Ripped to shreds by Mohammed Siraj in last game, KKR batting fallacies were severely exposed. It certainly was a confidence-crushing defeat and KKR need to regroup quickly. Even the change in captaincy has not instilled much confidence in the side.

The performance of pacer Lockie Ferguson has been the only bright spot for them amid the disappointment of Andre Russell’s poor run.

Russell missed out on the last match due to an injury and it will be interesting to see if the team management reposes faith in him, if he is fit.