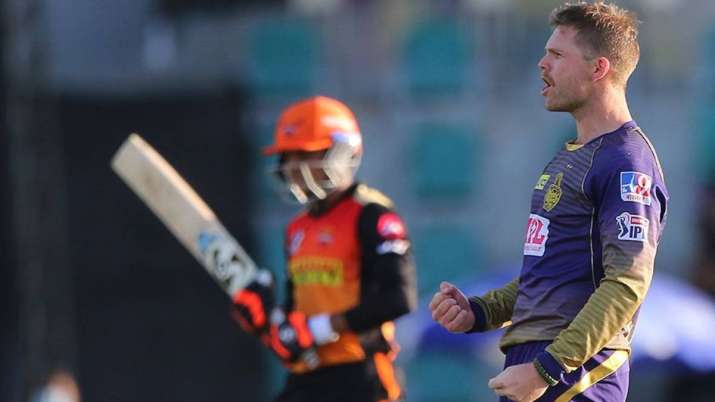 In a match full of drama, Lockie Ferguson proved what Kolkata Knight Riders missed for so long in the tournament as the New Zealand all-rounder took five wickets in the game, including two wickets in the super over, to hand out KKR a memorable super over win against Sunrisers Hyderabad in Abu Dhabi on Sunday.

Ferguson just gave two runs in the super over and gave KKR batters Eoin Morgan and Dinesh Karthik the comfort to chase it down in just four balls.

His effort came after David Warner scored a 33-ball 47 to take the match into super over while chasing KKR’s modest target in the second innings.

His 40-odd innings came while chasing a tricky 164 – set up after KKR captain Eoin Morgan (34 runs off 23 balls) and Dinesh Karthik  (23 off 14) combined to score 58 runs in the last five overs  — after Ferguson (3/15) ran through the SRH top-order in the middle overs despite a good start.

Chasing 164, skipper David Warner made some changes in the batting order. He promoted Kane Williamson to open with Jonny Bairstow while demoting himself to no.4 while allowing Priyam Garg to bat at one down.

The move paid dividend as Jonny Bairstow and Kane Williamson put SRH into the driver’s seat with 57 runs in the powerplay. The new opening combination contributed equally with ten boundaries and a six in the opening-wicket stand as none of the four bowlers in the first six overs were given any respite.

Medium-pacer Lockie Ferguson, however, put KKR right back in the game as he removed Williamson (29 off 19), Priyam Garg (4 off 7), Manish Pandey (6 off 7) in quick succession. Spinner Varun Chakravarthy also added his bit with removing the danger man Jonny Bairstow at 36; leaving SRH stuttering at 82/4 in the 12th over.

David Warner and Vijay Shankar tried reassembling the SRH innings with a 27-run stand but the latter soon fall to the rising pressure in the 16th over, needing 55 runs off 28.

No.7 Abdul Samad reignited hopes with some brisk hitting down the order but his departure in the penultimate over. But Warner scored 17 runs in the final over off the 18 needed against Andre Russell to take the match into super over.

Earlier in the first innings, Shubman Gill was the highest run-scorer for the two-time IPL champions with 36 but he took 37 balls to get to that mark before falling to Rashid Khan.

KKR’s top order struggled to get their shots away and by the time Andre Russell was dismissed off the last ball of the 15th over, the score was 105/4.

Morgan and Karthik, however, shifted gears in the death overs. Morgan hit three fours and one six while Karthik hit two fours and as many sixes. T Natarajan picked two wickets while Rashid Khan, Vijay Shankar and Basil Thampi picked a wicket each.