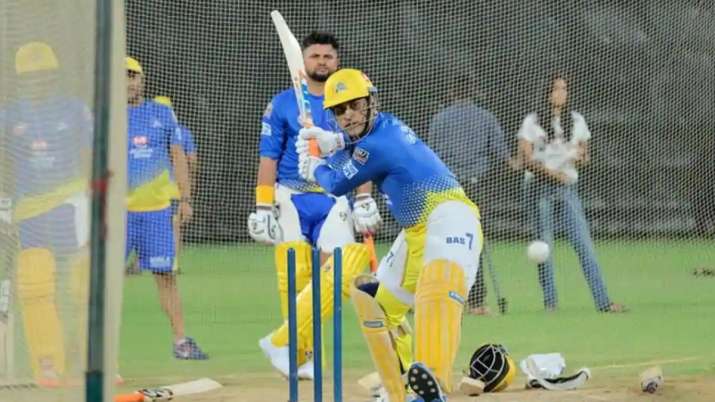 MS Dhoni might have been away from the game for over a year but that doesn’t seem to have bothered the 39-year-old powerful hitter. As the Indian cricket stalwart recently retired from international cricket and is at the fag end of his career, many would have doubted if Dhoni still possesses his batting prowess.

Such doubts were quickly erased by the IPL franchise Chennai Super Kings, who shared a video on social media from an intra-squad practice game; showing Dhoni whacking the ball out of the ground against spin bowling.

During the 35-second video, Dhoni was seen hitting a massive six on a practice ground in Dubai as the ball went out of the ground. The video was recorded by CSK team manager Russell Radhakrishnan, who could be heard asking “Ball lost?” as fielder goes to fetch it.

All you’ve got to do is watch this little video till the end and keep looping it. 🦁💛 #WhistlePodu #YelloveGame @msdhoni @mvj888 @russcsk pic.twitter.com/Yz5f1DQbOV

Murali Vijay, who was fielding on long on and standing close to the Russell, quickly said while looking at the camera, “Is it power Russ, is it power,” asks Vijay. “I don’t know, you tell me,” responds Russell. “Beautiful timing, bat speed, swing it’s gifted. Can’t do much better. I feel sad for the bowlers,” says Vijay as he throws the ball back towards the bowler for the game to resume.

The video has certainly left many CSK and Dhoni fans rubbing their palms after not seeing their favourite superstar in action since last year’s World Cup debacle in England.

To rejig reader’s memory, Dhoni was instrumental in helping CSK reach the final last year with 416 runs in 15 matches at an average of over 80 and a strike rate of 134.62.

While Dhoni has slowed down his game in the latter part of the career but the video has left fans hoping that they might get to see the old destructive side of the former Indian captain once again before he leaves the game for good.