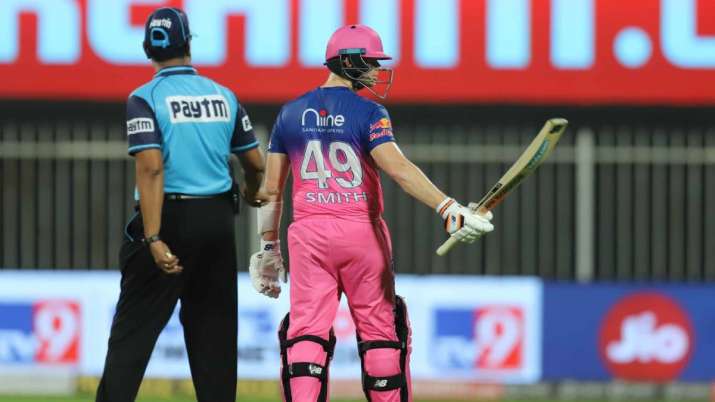 Shortly after Dinesh Karthik stepped down from the captaincy role of Kolkata Knight Riders on Friday afternoon, there was a little whisper around the corners on social media after Steve Smith following the same path. Rajasthan Royals’ Twitter handle too had teased the fans with a with picture of Jos Buttler along with a cryptic message. The rumours were rubbished off by the Royals’ Twitter, but any veteran and analysts of the game felt that Smith might be replaced or dropped amid his poor run of form. An evening later, Smith played one of his best innings since the two half-centuries he scored at the start of IPL 2020, to revive the Royals in their Dubai tie against Royal Challengers Bangalore on Saturday.

Rajasthan vindicated Smith’s decision to bat first in Dubai as the amassed 177 for six at the end of 20 overs, courtesy a good, positive start from Robin Uthappa who on returning to his old spot, fired seven boundaries and a six to score 22-ball 41. Royals, for the first time this season, had gone wicketless in their first 18 balls they faced, with the opening stand being 50 in 34 balls.

But in a space of 12 balls, Rajasthan went three down. Jos Buttler and Smith then looked to revive the innings, but the Englishman looked out of touch. Smith took time to get his eyes under the ball before clobbering two back-to-back boundaries behind the point region off Isuru Udana in the 15th over. He then went after RCB’s death-over specialist, for a six over deep square leg and a boundary, and their best bowler this season, Yuzvendra Chahal, firing three boundaries, two of which were of no balls.

Smith’s 36-ball 57 kept Rajasthan on track for a 185-plus total before Morris pulled back things in the final over with wickets of Smith and Archer while conceding only four runs.