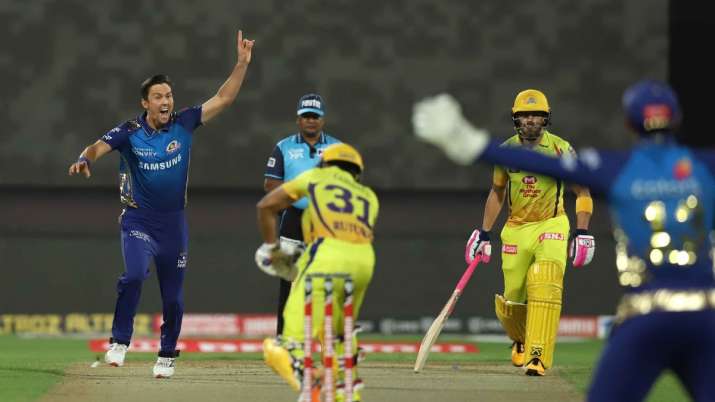 Mumbai Indians speedster Trent Boult wreaked havoc on Chennai Super Kings at Sharjah in Match 41 of on-going IPL 2020. The Kiwi stalwart left CSK batting unit gasping for breath by scalping a four-wicket haul. In the process, he also registered his best-ever figures in the IPL history.

Boult drew first blood in the first over itself by trapping opener Ruturaj Gaikwad. He struck again in his second over by plucking the prized wicket of Faf du Plessis and leaving CSK reeling on 3/4.

Boult’s wicket-taking spree continued in his third over as he showed the exit door to Ravindra Jadeja. Boult was also joined by Jasprit Bumrah and Rahul Chahar, who took two wickets each as CSK batsmen continued to perish at regular intervals.

Sam Curran, amassing a much-needed half-century, emerged as CSK’s lone warrior. The young all-rounder stitched 52 off 47 deliveries to steer his side to a respectable total of 114 runs. Boult, however, hit the final nail in the coffin by cleaning Curran up on the last delivery of the first innings.

Delivering a match-defining spell, Boult took four wickets in his four overs, including a maiden.

“Nice to get a couple early (wickets) on and hopefully we can go out and get these. Lot of swing early on which was nice, the job is only half done and we have to bat well and put some pressure on these guys.”

“I felt like probably I put out my best performance in the last few games and today it was nice to get a couple of wickets. One of our great fast bowlers back home (On working with MI bowling coach Shane Bond) and nice to be working with a familiar face and obviously with experienced guys like Pattinson, Coulter-Nile and Bumrah there’s always lot to learn in this tournament,” said Boult upon achieving his best bowling figures in the IPL.