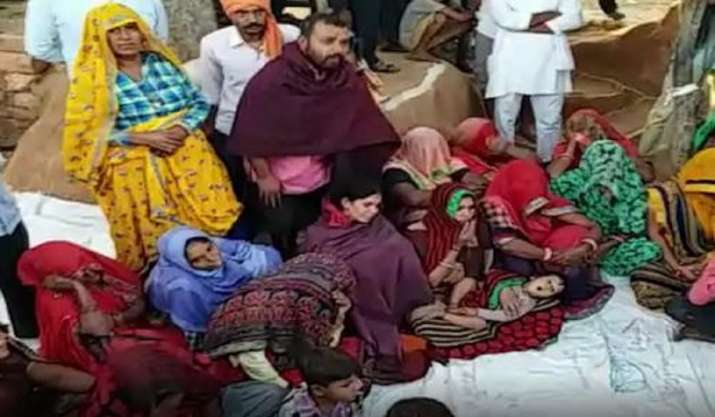 Family members of priest Babulal, who was allegedly burnt alive by land encroachers in Karauli’s Bukna village on Thursday night, have refused to perform the last rites of his body till all their demands are met by the state government. “We won’t perform the last rites of the body until our demands are met. We want Rs 50 lakhs compensation and a government job. All accused must be arrested and action should be taken against the Patwari and policemen who are supporting the accused. We want protection,” Lalit, a relative of priest Babulal said.

“People gathered for his last rites. They have made some demands from the administration and state government. We are requesting the deceased’s family to perform last rites as two days have passed since the death,” Meena said.

The priest was set on fire allegedly by five people who wanted to encroach on temple land in Rajasthan’s Karauli district.

The incident occurred on Wednesday in Bukna village where five accused caught the priest Babu Lal Vaishnav near an agriculture farm and set him on fire after pouring petrol on him.

He was admitted to SMS hospital in Jaipur in a crucial condition, where he died on Thursday night.

“The main accused, Kailash Meena, has been arrested, while another accused was rounded up,” Superintendent of Police, Karauli, Mridul Kachhawa, said.

The SP said a case of attempt to murder was registered at Sapotra police station and it was converted into a murder case after the death of the priest.

The accused wanted to encroach upon the land of the temple, the police said.

Deputy Superintendent of Police Kaila Devi, Mahaveer Prasad, said that the body was handed over to family members on Friday.

Meanwhile, Chief Minister Ashok Gehlot has condemned the incident and said that the main accused has been arrested, while the opposition BJP attacked the government saying the law and order has deteriorated and people are under fear in the state.