After Bollywood actor, Asif Basra was found dead at a private guest house in Dharamshala in Himachal Pradesh on Thursday, Kareena Kapoor Khan took to her social media handle to remember the late actor with whom she has worked in director Imtiaz Ali’s ‘Jab We Met’ co-starring Shahid Kapoor.

Sharing a photo creative of Basra, Bebo wrote, “Rest in peace Asif Basra heartfelt condolences to the family and loved ones.” 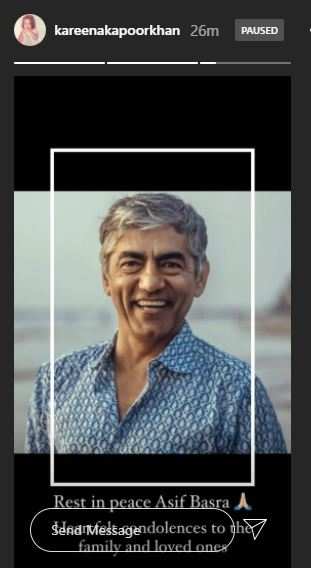 Meanwhile, Anushka Sharma has also put up a post to pay her last tribute to her co-actor Asif as she captioned it, “My sincere condolences and prayers with the family and the loved ones. RIP Asif Basra.” Similarly, Shraddha Kapoor has also shared a post to mourn the loss of the talented actor.

Breaking the shocking news of Asif Basra’s death, ANI tweeted, “Film actor Asif Basra was found hanging in a private complex in Dharamshala. Forensic team is at the spot and police is investigating the matter.”

“Prima facie it is a case of suicide but we are investigating the cause. The body has been sent for postmortem: SSP Kangra Vimukt Ranjan on actor Asif Basra’s death. #HimachalPradesh.”

Some of Asif Basra’s best works are ‘Jab We Met’, ‘Kai Po Che’ and many more.