Kris Smith was born on 20 August 1978 and he is currently 43 years old. He hails from Salford, England, and his zodiac sign is Leo. Talking about his family, his parents are mother Elsie Smith and father Edward Smith. There are no further details about his siblings, educational journey and qualifications, and other personal details.

Moreover, this personality suffers from osteoarthritis. Due to this, he needs to get titanium knee replacements in the future. Likewise, his nationality is English Australian also known as Anglo-Australian. At present, he resides with his family in Australia.

Professionally, Kris Smith is a model, TV presenter, and former professional rugby league footballer. People also recognize him for his involvement with a number of charitable organizations and causes. He is also known for being the co-host of Australia’s Next Top Model.

Prior to his career in the entertainment industry, this personality was a rugby player. He played for a number of British Super League clubs like Salford Red Devils, Leeds Rhinos, Swinton Lions, London Broncos, Oldham Roughyeds, and Halifax Blue Sox among others. However, a serious injury forced this personality to retire from this sport.

Subsequently, he developed his career in modeling. He signed with an agency in the United Kingdom. Following his move to Australia in the year 2008, this personality became a Myer ambassador. This contract has been renewed several times already since then.

Caption: Kris Smith appearing on the poster of the TV show ‘I’m a Celebrity… Get Me Out of Here’. Source: Wiki Fandom

All through the years 2012 and 2013, this personality was a regular contributor to Can of Worms. It is a discussion program that airs on Network Ten. Then in June 2013, this personality became one of the four original presenters of The Daily Edition. His co-hosts for this program were Tom Williams, Monique Wright, and Sally Obermeder.

Then in January 2017, this personality became one of the contestants to compete on the 3rd series of I’m a Celebrity…Get Me Out of Here!. In this competition show, he became the 4th celebrity to be eliminated.

Likewise, he was the guest-host of The Living Room in the year 2018. The same year, this personality was one of the celebrities to take part in The Real Full Monty. Then in early 2019, he teamed up with three of his The Real Full Monty castmates namely Shane Jacobson, Todd McKenney, and Brian Taylor. They teamed up and filmed a new travel comedy show Mates on a Mission.

Further, in August 2019, this personality appeared on The Chase Australia. Other celebrities on the show were Lisa Curry, Brendan Jones, and Ricki-Lee Coulter.

Kris Smith is in a romantic relationship with Sarah Boulazeris. The lovers have been together since 2017 and had their engagement on their 2nd daughter’s 1st birthday which was in December 2020. Together, the lovers share two beautiful daughters namely Mila and Frankie born in 2018 and 2019 respectively. His fiancée is a personal trainer and former Australia’s Next Top Model contestant. 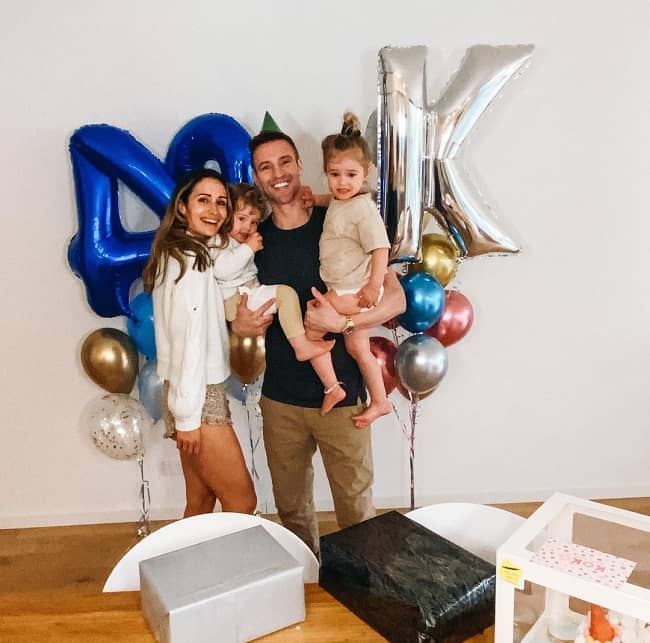 Caption: Kris Smith posing for a photo with his family. Source: Instagram

Kris Smith stands tall at an approximate height of 6 feet 2 inches or 187cm. Likewise, this model wears the shoe size 11 (US) or 10.5 (UK) or 45.5 (EU). Similarly, the model’s bust size is 111cm whereas his waist size is 91cm. However, his other body measurement details are unavailable like his bodyweight, dress size, biceps, etc. Moreover, this model has brown hair and eyes of the same color. 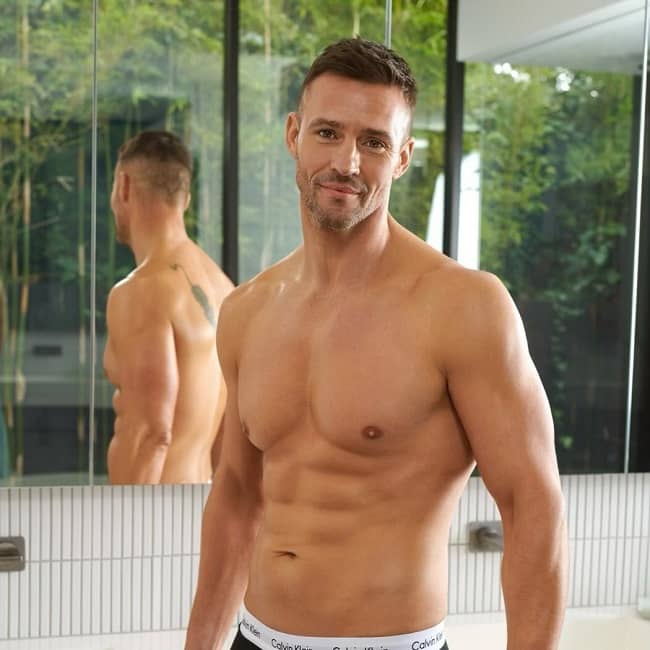 Talking about his social media presence, Kris Smith is available on Instagram under the username @krissmith13. While writing this biography, this account has garnered more than 148k followers. He also frequently appears on his fiancée’s Instagram account @thisisme.sb. Likewise, he has around 3.5k followers on his Facebook account. Other than this, he doesn’t seem to have profiles on other platforms like Twitter, Youtube, etc. Moving on, this personality has a net worth of around $1.5 million US dollars.