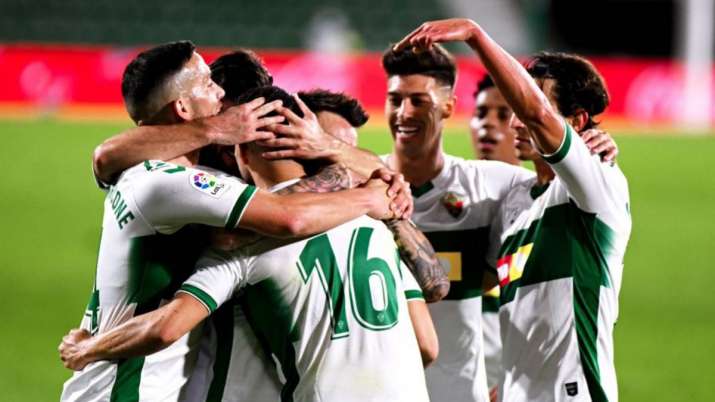 Elche beat Valencia 2-1 to deal the visitors a third consecutive loss in the Spanish league on Friday.

Valencia continues to struggle after not replacing several of its starters that it sold during the summer transfer window, including Rodrigo Moreno, Ferran Torres, and Dani Parejo.

Elche dictated the first half against a Valencia side that was unable to threaten its area. José Fernández curled in a strike to give Elche the lead in the 19th minute. Fidel Chaves added another goal with a pinpoint shot in the 37th.

Valencia pulled one back after coach Javi Gracía sent on Kang-In Lee. The South Korean midfielder threaded a pass through Elche’s defense that left left back Toni Lato alone to round Badía and score with 15 minutes remaining.

Kevin Gameiro was then inches away from equalizing when he squirmed a ball past Badía, only for Elche defender Gonzalo Verdú to clear it from the goal-line.

“We lacked intensity in the first half, they won all the loose balls and individual matchups,” Valencia midfielder Carlos Soler said. “We have to fight much harder for each ball. In the top-flight, you can allow yourself to make mistakes, but you can’t play without energy and effort.

“It is not time to sound the alarm bells. We have to go forward, step by step, but we also have to start turning this around now.”

Elche, which was promoted this season, has made an excellent start with three wins, one draw and one loss.

Mute WhatsApp Chats Forever Feature is Now Live on Android, iOS: How to Do it