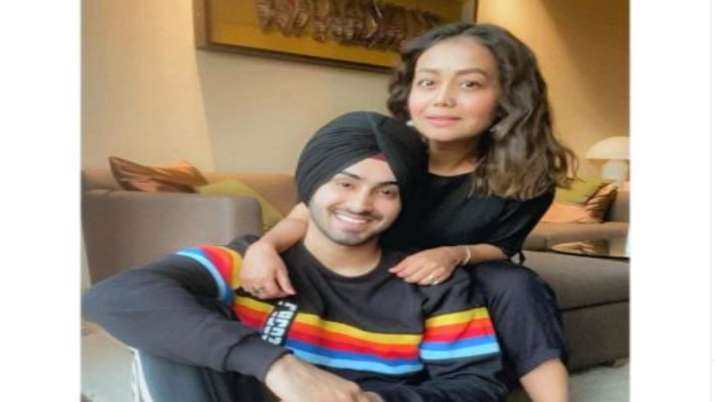 Neha Kakkar, on Friday, sent the Internet into a tizzy by sharing an adorable photo of herself and Rohanpreet Singh amid their wedding rumours. The singers have been trending on social media for the last few days, courtesy several reports stating that the duo will get married this month. Now, going by Neha Kakkar’s latest post, it appears she has made it Instagram official with the Sohni Lagdi singer.

In the photograph, Neha Kakkar can be seen posing happily with Rohanpreet Singh. “You’re mine,” she captioned the post, on which the latter commented: “Neha babu, I love you so much…Yes, I am only yours, meri zindagi.” Aww.

Rohanpreet Singh also shared a similar picture on his feed and introduced Neha Kakkar as his “zindagi.” He wrote: “Meet my zindagi, Neha Kakkar. #NehuPreet.”

Several of Neha Kakkar’s friends, as well as her fans, congratulated her in the comments section of her post. Actress Shraddha Arya commented: “Wohoo! Congratulations Nehu! Adorable couple!”

Earlier, a report in Times Of India quoted a source as saying that the couple will get married in Delhi by the end of October. However, neither Neha nor Rohanpreet has confirmed or denied the wedding rumours yet.

Rohanpreet Singh is known for participating in wedding reality show Mujhse Shaadi Karoge. He also appeared in the musical reality show India’s Rising Star and was the first runner up in second season. Before Rohanpreet Singh, Neha Kakkar was in a relationship with actor Himansh Kohli. The duo parted ways in 2018.

Neha Kakkar is best-known for singing tracks such as Dilbar redux, Manali Trance, Kala Chashma, Aankh Mare redux from Simmba among many others. Other than Indian Idol, Neha Kakkar appeared as a judge on the singing reality showSa Re Ga Ma Pa L’il Champs