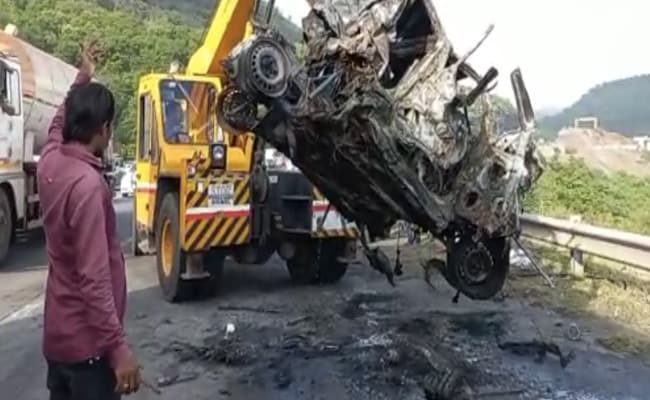 The impact was such that the three occupants of the car, including a four-year-old boy, died on the spot.

A road trip proved fatal for three members of a family after their car got hit by a container truck that lost control on the Mumbai-Pune Expressway in Maharashtra. The accident, the visuals of which were captured by the rear camera of another truck that was in front of their Hyundai i10, involved the car getting caught between the two big vehicles and being run over on Thursday.

The impact was such that three occupants of the car, including a four-year-old boy, died on the spot. The driver suffered serious injuries and was shifted to a hospital.

Following the accident, the car caught fire. A patrol team of the Highway Police reached the spot and rescued the driver of the container. He was hospitalised.

About 1.5 lakh people have died in road accidents in the past one year across India, according to the government.

The country accounts for the highest number of such incidents — 4.5 lakh — globally every year, with more than 4.5 lakh people being crippled and resulting in losses accounting up to 3.14 per cent of the GDP, the World Bank said in a report released earlier this year.