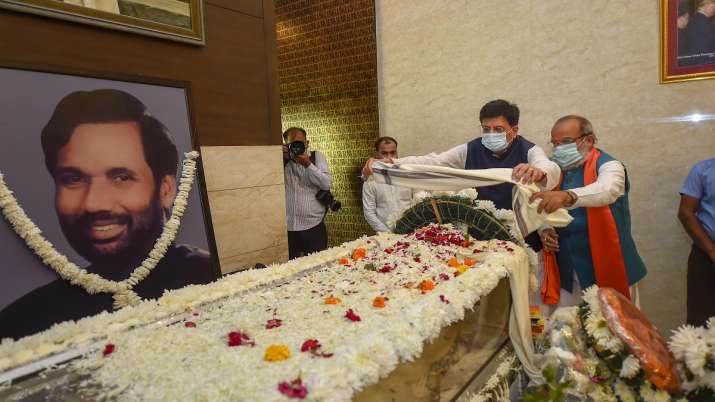 Union Minister Ram Vilas Paswan, who passed away on Thursday evening, will be accorded a state funeral at the ceremony in Patna tomorrow i.e, on Saturday. Meanwhile, Law and Infomation and broadcasting Minister Ravi Shankar Prasad would represent the central government. The decision was taken at a specially convened meeting of the Union Cabinet on Friday morning, that Prasad would represent the government of India and the Union Council of Ministers at the funeral of the veteran leader.

The 74-year-old parliamentarian died at a private hospital days after undergoing heart surgery. His mortal remains will be flown to Patna in a special aircraft from Delhi airport.

Delhi: The mortal remains of Union Minister and LJP leader #RamVilasPaswan, being brought out of his residence. The remains will be taken to Delhi airport from where it will be flown to Patna in Bihar.

The leader passed away yesterday. pic.twitter.com/q1lvn2wCVR

The Cabinet condoled the demise of the Minister for Consumer Affairs, Food and Public Distribution and observed a two-minute silence in his memory, according to the statement.

“The Cabinet approved a state funeral to be accorded for Shri Ramvilas Paswan,” the statement said.

The Cabinet also passed a resolution which said, “The Cabinet expresses profound sorrow at the sad demise of Shri Ramvilas Paswan, Union Minister for Consumer Affairs, Food and Public Distribution. In his passing away, the nation has lost an eminent leader, a distinguished parliamentarian and an able administrator.”

“The Cabinet extends its heartfelt condolences to the bereaved family on behalf of the Government and the entire nation,” it added.

Born on July 5, 1946, in Shaharbanni in Bihar’s Khagaria district. Paswan was educated at Kosi College, Khagaria and Patna University. He obtained degrees in Master of Arts (MA) and Bachelor of Law (LLB). He was also conferred the Degree of D.Litt. (Honoris Causa) by Bundelkhand University, Jhansi.

Paswan was one of the most popular leaders from Bihar and enjoyed strong mass support. He was elected to the Bihar Legislative Assembly in 1969 as a member of the Samyukta Socialist Party.

Thereafter, he was elected as a member of the sixth Lok Sabha from Hajipur constituency in 1977 with a record margin. He was re-elected to the seventh Lok Sabha in 1980 and the eighth in 1984.

Paswan was re-elected to the ninth Lok Sabha in 1989 and appointed as the Union minister for labour and welfare. In 1996, he became the minister for railways and continued to hold the post till 1998.

He later served as the minister for communications from October 1999 to September 2001, when he was made the minister of coal and mines, a portfolio he held till April 2002.

After the 2004 Lok Sabha elections, Paswan joined the United Progressive Alliance government and was made the minister of chemicals and fertilisers and minister of steel.

Paswan was considered the voice of the oppressed and always championed the cause of marginalised sections of the society, the resolution said.