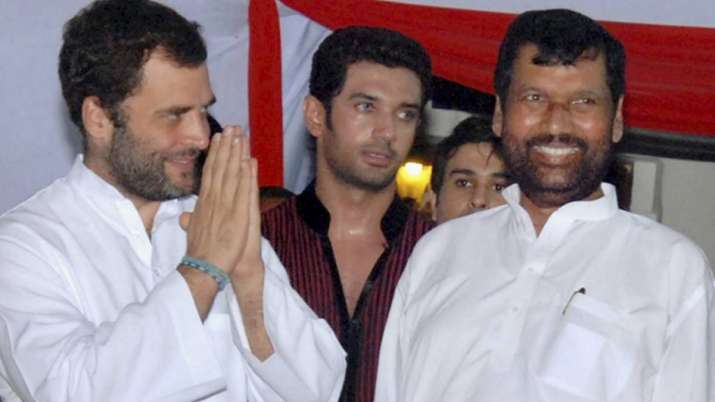 Senior Congress leader Rahul Gandhi on Friday expressed grief and sorrow over the demise of LJP founder and Union minister Ram Vilas Pawan. Rahul in a condolence letter to Ram Vilas’ son Chirag said that his father left a lasting imprint on politics and public service.

Ram Vilas Paswan, 74, died at a private hospital in Delhi on Thursday evening after recently undergoing a heart surgery. The Rajya Sabha MP was the Minister for Consumer Affairs, Food and Public Distribution in the Modi government.

“I am deeply saddened by the sudden demise of your father Shri Ram Vilas Paswan. We have lost a veteran leader who left a lasting imprint on politics and public service in both Bihar and our nation,” Rahul said in the letter.

“In an illustrious public life spanning over five decades, he gave voice to the most marginalised sections of our society and defended the rights of the poor and the vulnerable. As member of Parliament and Union Minister, he voiced their interests and concerns with passion,” the former Congress president added.

Paswan was one of the most noted Dalit leaders of the country. He founded the LJP in 2000, and stepped down as party president after 19 years in November 2019. His son Chirag now heads the party that has a strong base among Dalits in Bihar.

Rahul said that Paswan’s unwavering commitment to social justice and equality, His enduring legacy will continue to inspire people dedicated to public service. “My thoughts and prayers are with you and your family in this difficult time,” he wrote.

Ram Vilas Paswan is the second Central minister to die in the last two months. Earlier in September, MoS for Railways Suresh Angadi died of coronavirus.

Meanwhile, Ram Vilas Paswan will be accorded a state funeral, and Law and IT Minister Ravi Shankar Prasad will represent the central government at the ceremony in Patna. The funeral is likely to take place in Patna on Saturday. His mortal remains would be flown to Patna in a special aircraft, a PTI report said.