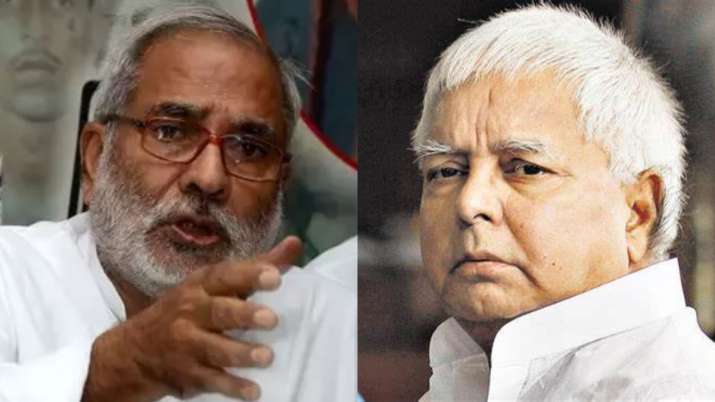 join now
In a major setback to Bihar’s main opposition RJD ahead of the state assembly polls 2020, its national vice president and former Union Minister Raghuvansh Prasad Singh resigned from the party on Thursday, sources close to him said, but party supremo Lalu Prasad rejected it, insisting he was not going “anywhere”.

In a letter to jailed RJD supremo Lalu Prasad, the veteran leader wrote he was quitting the party.

“Since the death of Jannayak Karpoori Thakur, I stood behind you for 32 years, but not now,” he said in his brief one-line resignation letter, written from his hospital bed on a ruled notebook page, to Prasad, who is serving sentences in four fodder scam cases in Ranchi.

In the footnote, the once staunch lalu loyalist, added,” I got the affection of party leaders and workers, besides common people. Please forgive me.” Thakur was a prominent socialist leader and former state chief minister.

Hours later, Prasad sought rapprochement. “I don’t believe…. a letter purportedly written by you is on social media. I, my family, and the RJD family that

have nursed the party want you to get well soon and be amongst us,” Prasad wrote back.

The RJD supremo’s letter to Singh was posted on the party’s media accounts.

“For four decades, we have together discussed political, social and even family matters. You get well soon and we will discuss again. You are not going anywhere, you understand,” Prasad wrote in a handwritten letter that had the stamp of the prison authority. Singh, admitted to AIIMS, New Delhi, because of post-COVID complications, had earlier announced his resignation as the party vice president on June 23 but was persuaded by
Prasad to stay back.

Singh, a five-time former MP from Vaishali who held several portfolios in the Manmohan Singh government, including that of rural development, was reportedly unhappy over the proposed induction of alleged mafia don and former Lok Janshakti Party MP from Vaishali Rama Singh into the RJD.

Rama Singh had defeated the RJD leader in the 2014 Lok Sabha election, breaking his winning streak since he was first elected from there in 1996.

He was also not happy with the style of functioning of Prasad’s heir apparent and leader of the opposition in the Bihar assembly Tejashwi Yadav, party sources said.

There was no official word from the RJD over Singh’s resignation, but NDA parties hailed his move.

“Raghuvansh babu commands respect of all. Why was he forced to quit the party he nursed with his blood and sweat?” Bihar BJP spokesperson Nikhil Anand said.

Anand said Singh was “humiliated” by RJD supremo’s elder son Tej Pratap Yadav after he announced his resignation from the post of party vice president.

“What difference will it make if a pot of water is taken out of the sea?” Tej Pratap had said, belittling Singh over his resignation and the impact it could have on the RJD.

“Singhs resignation will prove to be the last nail in RJDs coffin. This was the natural consequence of the suffocating atmosphere in which he had been living for quite a long time. Finally, he decided to come out of daldal (morass) which is worth welcoming, JD(U) spokesman Rajiv Ranjan Prasad said.

The JD(U) had said last week it will welcome Singh into the party if he so decides.

“I will request Raghuvansh babu to join Nitish Kumar (Bihar chief minister and JD(U) president) and strengthen his hands for the development of the state. Nitish Kumar is the only option. Come, join us, we welcome you,” said Danish Rizwan, the spokesman for HAM(S).