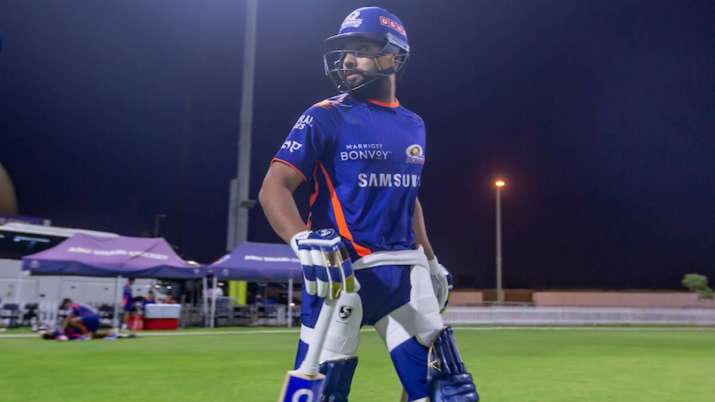 There wasn’t much of a concern surrounding Rohit Sharma‘s injury that he picked up during the ongoing Indian Premier League season in the UAE, until the Board Of Control for Cricket in India (BCCI) omitted him from India’s all three squads for the tour of Australia. Among the many questions that were raised post the team selection, Rohit’s availability for the remainder of IPL 2020 made it to the top. But a recent Mumbai Indians tweet hinted towards his return to the tournament in the later stages.

BCCI, in its press release, stated that their medical team would “continue to monitor [Rohit’s] progress”. There was nothing mentioned about the injury or the recovery period, neither did Mumbai Indians release a statement about Rohit’s present fitness status.

He had incurred a hamstring injury after the Super Over game against Kings XI Punjab and hence missed the next two games. Ahead of the CSK game, Mumbai released a statement saying that he “suffered left leg hamstring strain” during Kings XI game.

However, while BCCI’s selection committee were deciding on the touring team for the Australia series, Rohit was at the nets in Abu Dhabi, batting in “full flow” ahead of Mumbai’s game against Royal Challengers Bangalore on October 28. The franchise even released a “4️5 seconds of RO 4️5” video on Twitter.

This clearly implies that Rohit might not just be available for Mumbai’s later games in IPL 2020, he might just make it in time for the Australia tour as well. However, it is expected that Mumbai Indians would be cautious about their approach towards not rushing in Rohit into the playing XI given that BCCI’s medical team would be monitoring his progress while pritoritising his avaliability for the Australia tour above IPL.

The video, however, did not go down well with former Indian cricketer Sunil Gavaskar who called for “transparency and openness” on the injury, while opining that he wouldn’t be at the nets batting had the injury not been serious.

“A bit of transparency and openness about what kind of injury he has will help everybody, because the Indian cricket fans deserve to know,” he said while speaking on Star Sports.

“I understand the franchises don’t want to give their hand away because they want to win the game and don’t want the opposition to gain any psychological advantage [but] we are talking about the Indian team.”

Mumbai Indians’ statement did mention that he was making “good progress” which indicates an IPL return soon. Mumbai Indians have three more league matches ahead – against RCB on October 28, Delhi Capitals on October 31 and Sunrisers Hyderabad on November 3. They presently stand top of the points table with a win away from the playoffs which will be played between November 5 and 10.

Meanwhile, a source close to the cricketer told PTI that Rohit might be available for the SRH game.

“If Rohit can play during the last week of IPL, that will be a good enough fitness test and then selectors can think of getting him back in the squad,” he said.