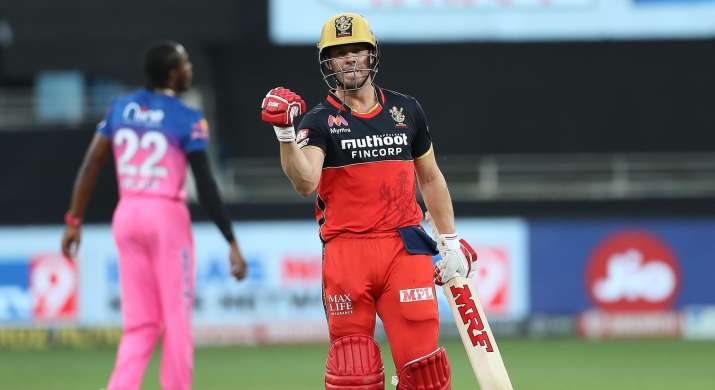 Royal Challengers Bangalore ended their busiest week this IPL with yet another AB de Villiers classic that single-handedly steered them out of sheer difficulty amid anoethr tactical gamble to a seven-wicket win on a slowish Dubai track. De Villiers fired 55 off just 22 balls to help RCB stay in track for a top-four finish this season with a win against Rajasthan Royals. And captain Virat Kohli couldn’t stop prasing De Villiers, hailing him as the most important match-winner in the tournament.

With 54 required off 24 balls, and a struggling Gurkeerat Mann at the other end, De Villiers needed only three balls to change the equation as he fired a consecutive three sixes against Jaydev Unadkat in the 19th over. The South African veteran fired 41 off just 11 balls in the slog overs to help RCB reach the target of 178 with two balls to spare.

“If we have to be honest, you are tense because you’re not sure how many balls he will face. When he plays like that you want him to face every ball, no offence. Always bats by the situation. He always looks at the team situation. In my eyes, he’s the most important match-winner in the IPL. Purely because of the presence of that man in the middle the opposition feels we’re not out of the game,” said Kohli, who had previously hailed him as ‘Superman’ following his unbeaten 33-ball 73 against Kolkata Knight Riders.

RCB have now won six of their nine matches to pick 12 points – as many as table-toppers Mumbai Indians and Delhi Capitals although both have played a game less than Bangalore.

Kohli was also asked if he would consider opening for RCB amid a misfiring Aaron Finch, but the captain backed the present pair of the Aussie and young Devdutt Padikkal.

“No our game pattern is very clear. Young Dev has batted beautifully, finchy has played some impact innings. We understand the dynamics and we’re sticking to our plans. The bowling has really stepped up this season. Looks we’re gonna be put under pressure but the guys have come back strongly,” he explained.

RCB will next face KKR in Abu Dhabi on October 21.

After a rest, I’ll be raring to go in India: Jonny Bairstow | Cricket News – Times of India

Over 80 police personnel injured in violence during tractor parade |...