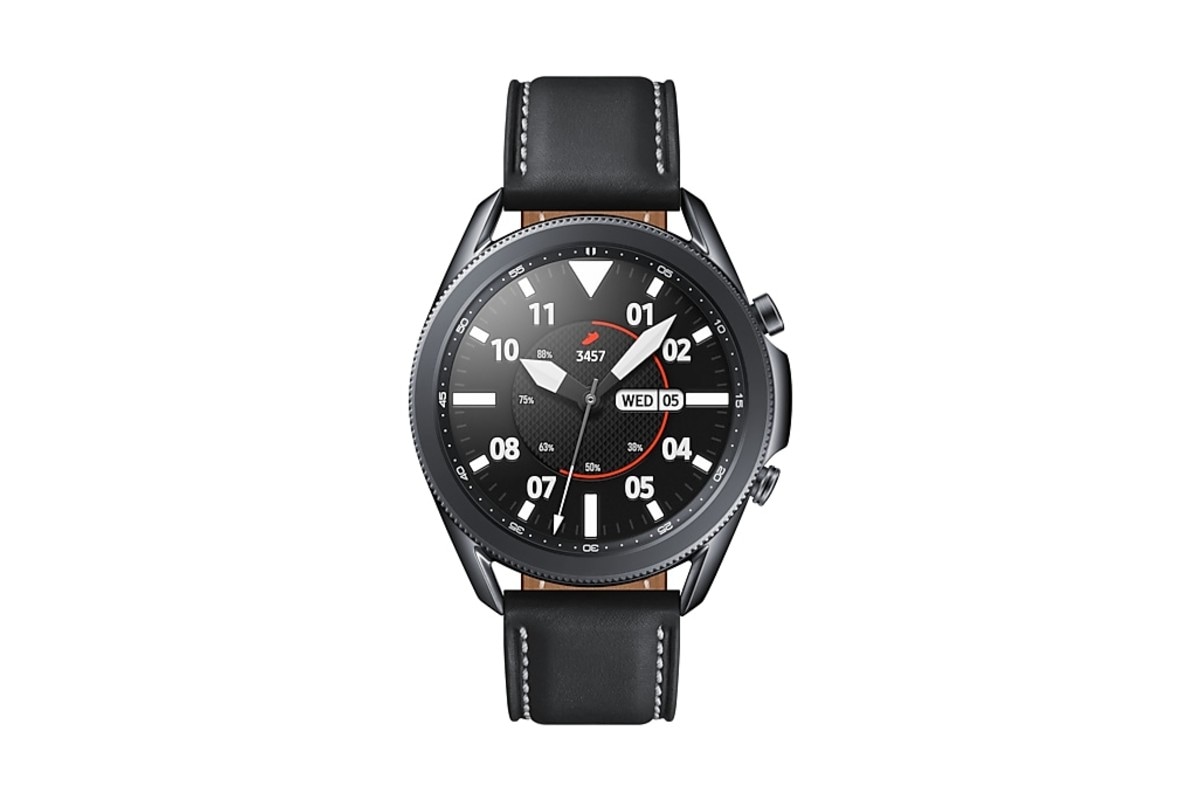 The Samsung Galaxy Watch 3 is no pushover. It has entered the smartwatch market at a time when the Covid-19 pandemic has hit the economy, and you might be better off shoring up your money across investment bonds rather than splurging on a gadget. While this would hold true at any given point of time, it is even more important now. Most of us are working from home, or at least partially so – in such times, the primary question is, do you really even need a smartwatch around you?

Then comes the counter question of fitness – wouldn’t you want to invest in a gadget that has serious health and fitness tracking credentials, so that you have an added motivation to work out for? There’s a rather instantaneous answer to this as well – if you want a wearable for fitness, wouldn’t you rather save some money and get yourself one of Fitbit’s latest products? After all, they too deliver the basic smartphone notifications.

First of all, the price

The Samsung Galaxy Watch 3 variant that I’ve been using is the 45mm, Mystic Black, LTE variant, which costs Rs 39,490 officially (not accounting for discounts). At this price, its obvious rival is the venerable Apple Watch – a line of smartwatches that are not only the market leaders, but also have two new variants on both sides of the Watch 3’s price tag. No matter what your definition of affordable is, there are no two ways about it – the Galaxy Watch 3 is about as pricey as you’d want your smartwatch to be. At this price, there are also plenty of alternate options available in the market.

What do you get for this money?

To start with, you don’t even get Google’s Wear OS (previously Android Wear). The Samsung Galaxy Watch 3 runs on Samsung’s own Tizen-based Wearable OS 5.5, which is both good and bad (more on this later). You very notably get Samsung’s long-standing party trick – the rotating bezel. It is a circular click-wheel that sits around the watch’s display, and rotating it is both fun and a very functional way of breezing through menus.

The Galaxy Watch 3 can now measure both SpO2 and VO2 Max, and while it does have an electrical heart sensor (ECG), it doesn’t have the clearance to operate the feature in India just yet. It has the standard heart rate sensor with eight embedded photodiodes, which works in an always-on form. Apart from these and the usual range of fitness freebies, the Watch 3 gets Bluetooth 5, Wi-Fi, LTE, integrated GPS, NFC, 8GB storage to install apps, a 340mAh battery, and a 1.4-inch Super AMOLED display.

Other abilities of the Galaxy Watch 3 include voice calling, speech to text (via Samsung’s Bixby) and a number of partially configurable watch faces, hence rounding off a rather robust set of features. It is undoubtedly one of the most well equipped smartwatches in the market right now.

Looks and comfort: Being conventional is good

The Samsung Galaxy Watch 3 isn’t particularly sleek. However, anyone who has ever remotely delved into horology knows that there is a sizeable faction of wristwatch enthusiasts, who consider heft as a sign of expected opulence on the watch itself. At 11.3mm thickness, the Galaxy Watch 3’s bulk is comparable with chronographs such as the Tissot Seastar 1000. However, what gives it away is, ironically, its lack of heft – the Samsung Galaxy Watch 3 weighs just above 50 grams, while any self-respecting chronograph would weigh above 175 grams.

So, if you’re an advocate of the classic chronograph looking for a possible smartwatch, the Galaxy Watch 3 may give you the looks of one, but certainly won’t emulate the feel. That, though, is good news for everyone else – which is the majority of Samsung’s customer base here. The Galaxy Watch 3 is meant to be light and easy on the wrist, while feeling premium enough. For the most part, it suffices in playing that role. The stainless steel ‘mystic black’ finish looks premium, and the muted design has an elegant air to it.

For the most part, the Galaxy Watch 3 is comfortable as well. It isn’t light enough for me to forget that I’m wearing it, but isn’t so heavy that I’d take it off every now and then. As a result, it makes sure that I wear it for most of the hours spent awake. However, it isn’t really that comfortable that I’d happily wear it to sleep. To be honest, I did try sleeping while wearing it for a few days to see how it tracked my sleep, but if it comes to living with the Watch 3, I’d never wear it to sleep.

On overall terms, the Samsung Galaxy Watch 3 is built on conventional bearings. It tries to not abjectly feel like a gadget, which is very important for something that you’d wear on your wrist. It looks elegant, and the click-wheel rotating bezel makes shifting through menus very easy. On the looks, comfort and ergonomics front, the Galaxy Watch 3 is mostly a winner.

ALSO READ | TicWatch Pro 2020 Review: Upgrades Improve This Smartwatch, But It Is Still Not An Entirely New Watch

Fitness and health: Nails the jog, not the oxygen

More than anything else, the one thing that the Samsung Galaxy Watch 3 managed to do was force me to get up and start going out for walks. You’re served regular reminders while working, to make sure that you get up once in a while and do basic stretches and lunges. Fair warning – switch this off before you go on a long drive on the highway. What impressed me was that while driving in the city for long hours, the Galaxy Watch 3 could read my leg muscle activity. Understandably, highway driving is more static, which promptly fooled it into assuming that I was being inactive.

Step and automated calorie tracking, meanwhile, are super accurate. I could barely find discrepancies in what the Galaxy Watch 3 readings showed with regards to my daily step counts. Exercise tracking has good micro-controls for correctly reading your body activity and calorie burn, and alongside the standard modes of running, cycling etc, you also have dedicated workout modes for bench press, burpees, bicep training and so on. It is here that the Galaxy Watch 3 nails its fitness credentials.

Sleep tracking is another impressive aspect of the Galaxy Watch 3. On days when I did wear the watch to sleep, I was rather surprised to see how accurately it managed to track my sleeping hours. The watch also geotags your runs and actively monitors your heart rate for any discrepancies. For fitness enthusiasts, the Galaxy Watch 3 has three bars to fill – activity, workout and movement (while working), and like on any smartwatch today, filling up the bars can become very easily addictive. What I’m not convinced about, though, are the health features.

What also alarmed me are the lack of alerts. There were times that the Galaxy Watch 3 read my heart rate as consistently tachycardic (i.e., over 100 beats per minute). This would combine with blood oxygen readings of less than 75 percent, and both the readings combined sound alarming enough for the watch to issue a gentle prompt for a user to consult medical help. Samsung, however, does not provide any such prompts – and this is what still sets Apple’s health offerings apart. Even the breathe interface isn’t quite the same as what Apple offers – actively going looking for the one-minute deep breathing exercise isn’t the right step towards helping you relax.

Beyond the health failings of the Galaxy Watch 3, it works perfectly fine as a smartwatch. There is a brief, half-second delay in relaying call and message alerts from my daily-driver smartphone (a OnePlus device), and I could not confirm whether this was an issue pertaining to using a non-Samsung smartphone, or simply by design. What I could confirm, though, is that it does absolutely no inconvenience to using the Watch 3 for calls and texts on the fly.

The speaker is loud enough for you to take critical calls through the watch itself, in situations such as driving. Audio reception of the watch’s integrated mics are also superb. However, texting on the fly isn’t particularly a joyous experience – getting to the reply button will at least need one scroll, and setting up Bixby Voice was an extremely annoying experience on a non-Samsung smartphone.

Thankfully, the Samsung Galaxy Watch 3 offers fast loading times for all notifications, all of which combine to make your overall work day more convenient for sure. It is an added convenience in the truest sense – you don’t really need it, but if you have it, you certainly wouldn’t mind using it.

App support and battery life: Stuff for the Watch 4

First, app support. The Samsung Galaxy Watch 3’s native app support is in shambles, when compared to Google’s Wear OS app ecosystem. However, the Galaxy Watch 3 thankfully offers direct control of notifications for popular messaging apps such as WhatsApp, Slack and Signal. Among my everyday apps for work, only the Microsoft Outlook app was available directly on the watch. While this meant that I could check on my work emails at convenience directly from the watch itself, I couldn’t do so for any messages on WhatsApp or Slack, and hence, had to get to my phone, sooner than later.

It is this that Samsung desperately needs to improve, and even the addition of a native WhatsApp app on Samsung’s Tizen-based store would go a long way for many users.

Coming to battery life, the Samsung Galaxy Watch 3 offers reasonably decent battery backup. While I never got the much-quoted “two-day” battery life, I did get a full day, with constant sensors and trackers, as well as the always-on display enabled. The overall battery life for the Galaxy Watch 3, even with heavy, intensive usage, would last you for over one day, which is quite good. The Galaxy Watch 3 charges slowly, though, and the 340mAh battery takes close to an hour to charge up fully.

What I absolutely hated throughout, and continue to do so, is the impact it has had on my phone battery. If you want continued location and notifications sync, be prepared to sacrifice your smartphone’s battery life by close to 50 percent.

So, should you buy it?

All things considered, the Samsung Galaxy Watch 3 is certainly a mixed bag. Its LTE connectivity (via eSIM) isn’t available if you are a Vodafone-Idea (now Vi) customer. It is expensive, its health tracking (SpO2 in particular) does not appear to be the most accurate, third party app support is minimal, and with all features firing, it really destroys your phone’s battery stamina.

However, the Samsung Galaxy Watch 3 is a good-looking smartwatch. It has enough watch faces to keep you happy, its razor-sharp AMOLED display is a delight, its fitness tracking features are excellent (even sleep tracking is absolutely on-point), taking calls on it is highly convenient, and on overall terms, it does make for a fine smartwatch. For the most part, you will find the Galaxy Watch 3 to be more of a convenience than a liability, and that is half the battle won for any smartwatch.

The only question is, should you really spend close to Rs 40,000 for a smartwatch? If you’re an Android smartphone user, and you want the full monty when it comes to smartwatches, you won’t regret buying the Galaxy Watch 3. For the Android ecosystem, this is truly as good as it gets, and things such as app support and health tracking accuracy can only improve via software updates in future.

For now, be sure to use a dedicated oximeter and take a hit on your smartphone’s battery life, once you get your Samsung Galaxy Watch 3 home.

Thursday Throwback: When Sushant Singh Rajput featured on the cover of...