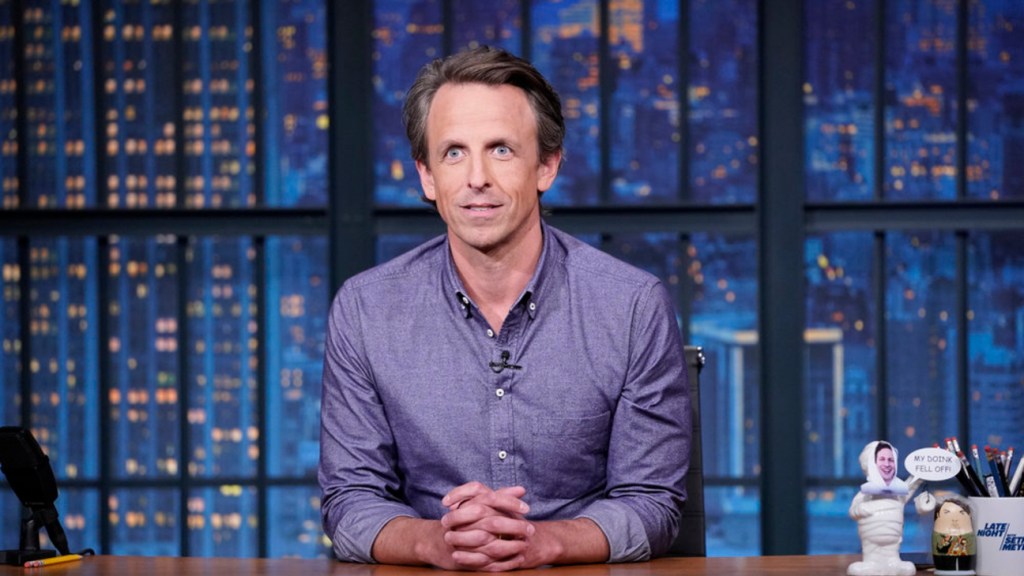 Seth Meyers spoke to the work and legacy of comedian Norm Macdonald during Tuesday night’s Late Night episode, which taped just hours after news broke that the former Saturday Night Live cast member had died of cancer at 61.

“Really tragic news that we found out just a couple of hours before we started taping,” Meyers began his tribute segment. “I do not think that Norm would want to hear anything sentimental but I would like to say a few of my favorite things that I heard Norm say that I was lucky enough to hear Norm say over the years.”

Meyers then launched into a series of his favorite jokes from Macdonald, which included one he heard during a visit from the comedian and former “Weekend Update“ host to the Saturday Night Live set in 2001, which Meyers said was “the first thing I ever heard him say in person.”

“I don’t remember how old his son was at the time, but his son was young and someone said, ‘Hey Norm, how’s being a dad?’ And he said, ‘It’s going great. Still no abductions,’” Meyers delivered the joke, to studio laughs.

Meyers also recalled the SNL 40th anniversary episode, during which the Late Night host says Macdonald broke from the cards and began talking, “and none of it was what he was supposed to say.”

“I remember laughing really hard — not at what Norm was saying, as much as the idea that any of us thought Norm would play by anyone else’s rules on any night,” Meyers recalled before going into Macdonald’s philosophy about the freedom of being able to “bomb” on SNL.

“Norm said that was so great because by the time ‘Update’ rolled around if the show was bad, you could literally just go out there and bomb, and that both made that level of difficulty something that I think he really respected and also he loved,” Meyers continued. “Or I should say he just didn’t care if he was bombing if he thought the jokes were good. He had exactly as much fun telling them to a dead audience than to one who appreciated them.”

Meyers went on to note how “so many of us came up watching Norm” and how the connection many felt to him because of his ability to “just stare into an audience, unblinkingly telling the jokes that you believed in.”

Meyers ended his tribute with another personal anecdote, revealing just how much Macdonald had impacted his time, particularly on “Weekend Update,” while at SNL.

“One of the hardest parts about doing ‘Update‘ for me was not telling every joke the way I thought Norm would tell it. Like, I had to beat Norm’s delivery out of me. It still sneaks in all the time, but I really had to keep an eye on it,” Meyers explained. “I told him how hard that part was to me and he said, ‘I’m so glad to hear you say that because my son was watching you on ‘Update,’ and said to me, ‘You talk like Seth Meyers.’” He told me that when he said that, he said, ‘Oh no, my son doesn’t know how time works.’”