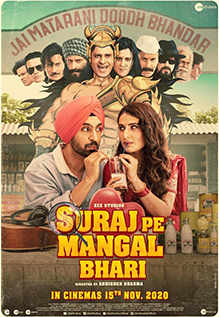 STORY: Call it pigeon-holed approach, but Madhu Mangal Rane (Manoj Bajpayee) has vowed to get lafangaas out of all the future brides’ ways in Mumbai (then Bombay) and his count is soaring; 48 grooms exposed so far. But the 49th one turns out to be a bouncer in his life. ‘Duduwala’ (the writers’ words, not ours) Suraj Singh Dhillon (Diljit Dosanjh) is 28 and that one time he tries to model his life on the bad boys of Bollywood, Rane catches him off-guard and desperate Dhillon is now without a bride… yet again! ‘Suraj Pe Mangal Bhaari’ chronicles the clash of these two men-children, and it is mad fun!

REVIEW: When Gurunam Singh Dhillon (Manoj Phawa) had taken the leap of faith and shifted base to Bombay from Punjab – with the hopes of making it big in the city – he not only married the love of his life (Seema Bhargava), but also inherited 22 buffaloes. Cut to 1995, Papa Dhillon now has everything he had ever hoped for and has built Jai Matarani Doondh Bhandar with love, dahi and lots of paneer (brace yourselves: there’s a lot of dairy reference in the movie for all you lactose-intolerant peeps). But one characteristic trait that he could not hand down to his only son, Suraj Singh Dhillon (Diljit Dosanjh), is his innate ability to win over girls. So when the greedy pundit brings home the kundali of an English-speaking, shorts-donning girl from Bhandup, the entire Dhillon clan jumps with excitement. Not so soon; a little someone stinks of ghee and must be warded off for good. Multiple rejections later, Suraj’s bestie Sukhi, who only mimics Amitabh Bachchan from his angry young man phase, suggests he be the baddie that girls usually hanker after. So when a prospect finally gives her nod, he loses that last flickering hope to a set of photos of him chugging beer.

Who has defamed him and the family? And, most importantly, which ‘bharatiya naari’ is going to marry him now? Suraj refuses to dusk away and he must now be avenged. The culprit: self-proclaimed wedding detective with an impressive repertoire of 48 exposés, Madhu Mangal Rane, is oblivious to his dubious plans though. What happens when these two metaphor-tossing ego maniacs clash, and who’s to lose what here? ‘Suraj Pe Mangal Bhaari’ takes a dig at the concept of arranged marriages and all the snooping around that happens within the families for that ‘one achha ladka/ladki’, and, guess what, we are laughing!

Dressed in a nauvari saree, nath and exuding a certain charm that can easily be mistaken for a local hottie, Manoj Bajpayee is hilarious as the lame undercover wedding detective, gossip-monging at a local temple in his opening scene. The jokes are hyper-local, and the attitude, all too relatable. A little later, an equally funny and seasoned humourist joins the frame, Annu Kapoor as Kaka – a family friend and a business liability whose only contribution is that he had once helped Rane’s deceased father with 1200 rupees. The two feed off each other’s energies and their comic timing is impeccable, especially when they bicker over bills and biryanis. Fatima Sana Shaikh is Turshi Rane (Turshi, not Tulsi): a ‘gharelu ladki’ by the day and a closeted DJ by the night; she is attractive and a satisfying chameleon – demure when the situation demands, rebellious when the going gets difficult. What takes this movie notches higher is Diljit’s excellent dialogue delivery and his comic timing. Something as cheesy as, “kya kar rahin hai, butter hands?” or “first sight mein, torch light pe, mujhe tumse pyaar hogaya” would have been a tricky one for a lot of actors, but he charms in the flashiest of scenes and makes one chuckle, knowing full well the joke is stale. His camaraderie with Sukhi and the squabble with Bajpayee are what keep the momentum of the film racing at a thundering speed; the first half in particular. But ‘Suraj Pe Mangal Bhaari’ is brainless comedy (not being condescending here), and not everything is meant to add up.

Right from the very start, it is glaringly obvious that the writers – Shokhi Banerjee, Rohan Shankar and Rohan Shankar – are heavily invested in getting the nitty-gritties of the respective acts right and each of the characters has been given distinct personalities and pull-backs. What milk is to Suraj, marriage is to Rane. You will find out why we say so. The celebration of cultures and their blending in together is one that deserves a shout-out, especially in that scene when a group of turban-wearing orchestra performers sing a Marathi wedding song.

The first-half is a visual essay of the lives of Dhillons and Ranes, with so many characters and situations popping in and out of the sequences, but the second-half, especially the ending, feels rushed with a predictable climax. That needed polishing.

Kingshuk Chakravarty and Javed-Mohsin have compiled an amazing collection of songs – if ‘Basanti’ will be remembered for Karishma Tanna, then ‘Ladki Dramebaaz Hai’ and ‘Bad Boys’ will be played on loop for the high-octane music. The set design, however, was a bit of a downer. Except for the incorporation of the Frankfurt Bauhaus telephone, long queues outside of a P.C.O booth and a pager to sort of remind us that it’s still the mid-90s, the film has a very in-the-moment feel to it. Also, Jia Bhagia and Mallika Chauhan could have gone more retro with the styling for Diljit and Fatima; it is preposterous that the duo’s hanging out in bomber jackets and corset crop tops from a time when Mumbai used to be Bombay.

All said and done, ‘Suraj Pe Mangal Bhaari’ is a witty satire – on the gori–kaali hangover, what qualifies as good or bad behaviour in today’s world and how little soothsayers know about marriages. Hop on and join in in the tug of war!