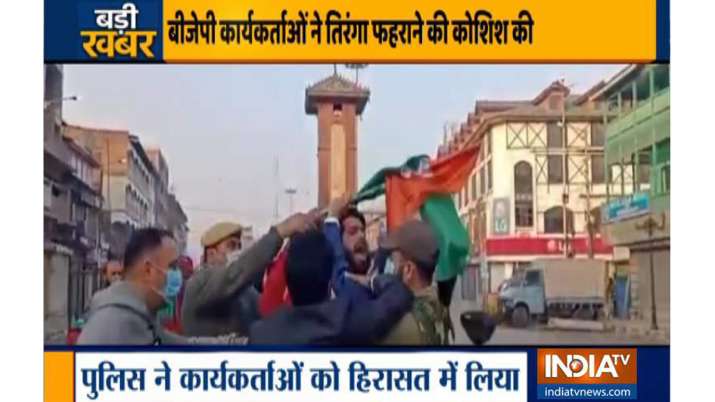 Three Bharatiya Janata Party (BJP) have been detained by the Jammu and Kashmir police on Monday for trying to hoist the Tricolour at the Clock tower in Srinagar.

The three workers had come to the capital Srinagar from the Kupwara district. They have been identified as Mir Basharat, Mir Ishfaq, and Akhtar Khan. Basharat is thy party spokesperson from Kupwara.

They reached the Lal Chowk early morning to hoist Tricolour. The BJP workers said that they wanted to send a message to the People’s Alliance for Gupkar declaration that only the Tricolour will be unfurled in Kashmir.

The detained BJP workers have been lodged at Kothibagh police station.

The development comes a day after a group of youths took out a march outside the PDP office to protest against Mehbooba Mufti’s remarks on the national flag. Mufti had on Saturday said that she “is not interested in contesting elections or holding the Tricolour till the constitutional changes enforced on August 5 last year are rolled back”.

Meanwhile, the People’s Alliance has adopted the erstwhile flag as its symbol to fight for the restoration of Article 370. While National Conference leader Farooq Abdullah (84) has been appointed as the president of the bloc, Mufti will be its vice president.

This is for the first time the political rivals in Jammu and Kashmir have joined ranks to unitedly to fight against the Modi government’s decision to abrogate the special status and bifurcate it into two UTs.