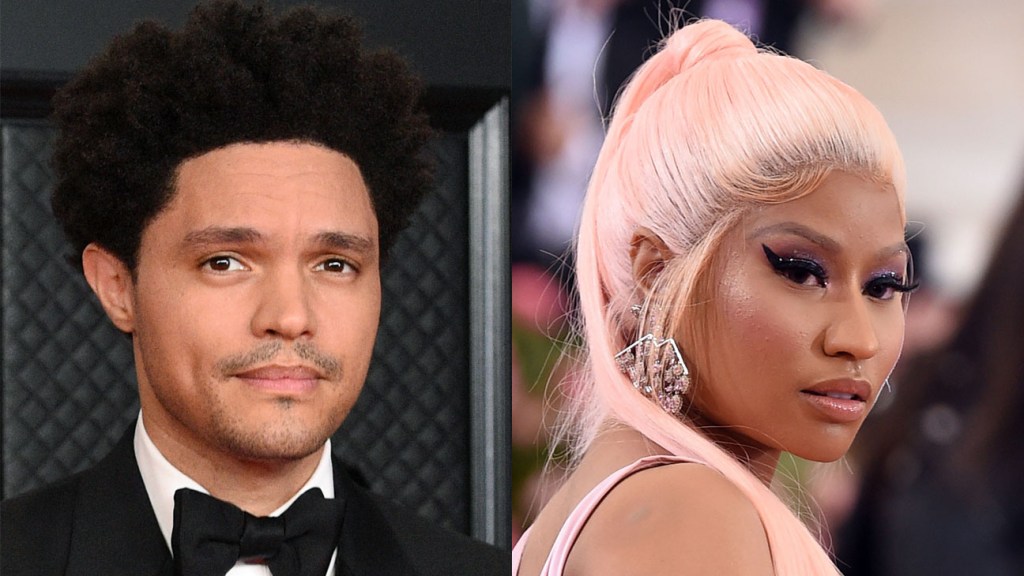 Late night — and the Trinidad & Tobago Health Minister — are calling out COVID-19 related claims from Nicki Minaj, which the singer-rapper made ahead of The Met Gala.

On Tuesday, Minaj tweeted out the news that she wouldn’t be attending the event because she was unvaccinated and that ultimately if she does get vaccinated, it wouldn’t be for an event like that. She also confirmed that she had contracted COVID-19 while gearing up for the VMAs. But the entertainer’s next post, which linked the “swollen testicles” of a family member’s friend to the COVID-19 vaccine, is what caught many’s attention.

“My cousin in Trinidad won’t get the vaccine cuz his friend got it & became impotent,” she tweeted. “His testicles became swollen. His friend was weeks away from getting married, now the girl called off the wedding. So just pray on it & make sure you’re comfortable with ur decision, not bullied.”

Minaj later added that she’d “def recommend” others get the vaccine before encouraging people to “wear the mask with 2 strings that grips your head & face. Not that loose one.”

But the story of the swollen testicles set off a string of criticisms, including from MSNBC’s Joy-Ann Reid, who blasted the singer’s comments on her show, The ReidOut. “People like Nicki Minaj, I have to say this: You have a platform sister. That is 22 million followers. OK? I have 2 million followers. You have 22 million followers on Twitter. For you to use your platform to encourage our community to not protect themselves and save their lives. My God, sister. You could do better than that,” Reid said.

The Late Show with Stephen Colbert followed Reid’s lead, remixing the artist’s hit “Super Bass” into a parody, “Super Balls.” A voice-over begins, “This one’s for the boy’s with the swollen testes. It’s a tale that was told by my cousin’s bestie. No need to fact-check or debunk him, Said the vax filled his sacks with two massive pumpkins.”

It continued, “The plight of this man should be told to my 20+million fans. I mean, think of just how large my reach is. To share about James and his giant peaches.”

The Daily Show‘s Trevor Noah similarly called out the oddness of Minaj deciding to share the story of someone else’s medical issues to her millions of followers in a nine-minute segment, which he began by noting that “there’s a lot to digest here.” Beyond reinforcing that vaccines are safe and effective, Noah directly addressed Minaj’s response to Reid over Twitter, which charged that the host was “being used by white people to take down a black woman.” It also unearthed a tweet from the MSNBC host about not trusting the vaccine as it was developed during Donald Trump presidency.

Noah argued that despite the pile-on of Minaj, “a lot of liberals were in the same position, and people like that should probably have a little more patience for people who haven’t gotten over that hesitancy as fast as they have.” He then added that the singer’s hesitancies and slowness to come around “happens with a lot of things in society,” with Noah specifically pointing to Crocs shoewear, and the shift the public had around firs their contempt and then appreciation for the style.

The host said that instead of “crucifying” people who argue they still need to do more research, people should instead “take them at their word” and show them the research that has shown that vaccines are “overwhelmingly safe and effective.”

“Like, I get why Nicki Minaj feels attacked just for saying that she wants to do her own research. I get it,” he said. “But at the same time, Nicki, let’s be real. In fact, not just Nicki, everyone. Can we all stop saying I need to do my own research? Nobody who’s saying that is getting in the lab and doing tests. At best, you’re reading other people’s research. And more likely, you’re probably reading a tweet about a headline about a blog post about someone else’s research.”

As for the story about Minaj cousin’s friend, Noah admitted he didn’t know, joking that “maybe he sprayed Miracle-Gro on them” or that it’s an optical illusion. “Maybe his balls didn’t actually get bigger, but his penis just got super, super tiny.”

“But even if you do want to blame the vaccine, Trinidad doesn’t even use the same vaccines as America,” he pointed out. “Think about that. They use the Chinese vaccine, Sinopharm.”

Later on Wednesday, a video of Trinidad and Tobago Health Minister Dr. Terrence Deyalsingh responding to Minaj’s comment emerged, indicating that, unlike Noah, he does have an answer, and it’s that to his department’s knowledge, that effect doesn’t exist.

“One of the reasons we could not respond yesterday in real-time to Ms. Minaj is that we had to check and make sure that what he was claiming was either true or false. We did and, unfortunately, we wasted so much time yesterday running down this false claim,” he began. “As far as we know at this point in time, there has been no such reported either side effects or adverse event.”

“What was sad about this is that it wasted our time yesterday trying to track down because we take all these claims seriously, whether it’s on social media or mainstream media,” he said. “As we stand now, there is absolutely no reported such side effects or adverse event of testicular swelling in Trinidad.”