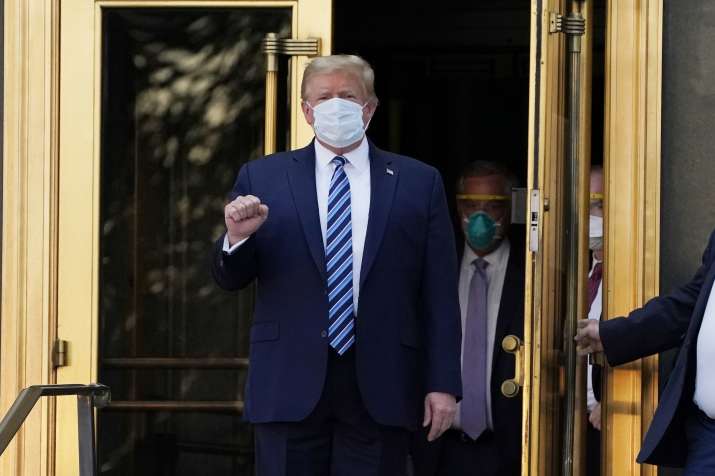 US President Donald Trump who was convalescing from COVID-19 infection, would hold an in-person event on the White House lawns for the first time since contracting the viral disease on Saturday and hit the election campaign trail from Florida on Monday. The president took to Twitter to announce his decision to return to campaigning.

“Will be in Sanford, Florida, on Monday for a very BIG RALLY!” he wrote on the microblogging site.

Trump, 74, and First Lady Melania tested positive for COVID-19 last week. The president was taken to a military hospital for treatment, which the White House said was taken as a “matter of abundance caution”.

After spending four days, he came back to the White House on Monday.

White House physician Dr Sean Conley said on Thursday that the president was “safe” to return to public life on Saturday.

Trump will hold his first in-person White House event on Saturday, for the first time since recovering from the COVID-19 infection.

“The president delivers remarks at a peaceful protest for law and order on Saturday,” the White House said late on Friday night as it released his weekend schedule.

The event will take place on the South Lawns of the White House. Trump is expected to address the gathering most likely from his balcony.

Earlier, his campaign said Trump will deliver remarks at a Make America Great Again event in Sanford, Florida on Monday.

“All attendees will be given a temperature check, masks which they are encouraged to wear, and access to hand sanitizer.”

Announcements from the Trump campaign indicated that the campaign is now going into full swing with its top leaders including Vice President Mike Pence, and the president’s sons Donald Trump Jr and Eric Trump and daughter Ivanka visiting different parts of the country canvassing for him.

Eric Trump would campaign in Michigan and Minnesota on Monday and Tuesday. Ivanka will travel to Phoenix in Arizona on Sunday to participate in a conversation with local supporters.

“The enthusiasm we are seeing for President Trump and his America First Agenda is at an all-time high and I am excited to once again be back in this great state to highlight the President’s accomplishments during these past four years,” Ivanka said in a statement.

Meanwhile, Tim Murtaugh, the Trump 2020 campaign communications director, in a statement said there is no medical reason to stop the October 15 debate in Miami from proceeding as scheduled, since the President will be healthy and ready to debate.

“There is also no reason there shouldn’t be the three presidential debates as Joe Biden had originally agreed. We have suggested October 22 and October 29 for holding the final two debates. It’s time for the biased commission to stop protecting Biden and preventing voters from hearing from the two candidates for president,” he said.

“There’s nothing that says that President Trump and Joe Biden can’t debate together without the overlords at the commission having a say in the matter. We would be glad to debate one-on-one without the commission’s interference,” Murtaugh said.