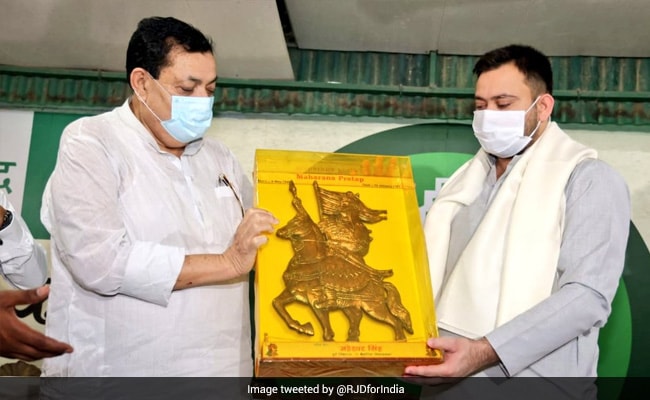 The Rashtriya Janata Dal (RJD) claimed to have received a shot in the arm today with the induction of Maheshwar Singh, a two-term former MLA from Chief Minister Nitish Kumar’s Janata Dal (United), into the party.

Maheshwar Singh accepted the party’s primary membership in the presence of Tejashwi Yadav – the Leader of Opposition in Bihar – and claimed he walked out of the NDA despite “a lot of pressure” and added that his supporters in Bihar’s East Champaran district are going to follow suit.

Welcoming Mr Singh into the RJD, Tejashwi Yadav recalled his old association with the former who was the Lok Janshakti Party’s leader in the state assembly a decade ago when the party founded by Ram Vilas Paswan had an alliance with Lalu Prasad’s outfit.

Mr Yadav claimed “many more” leaders from the JD(U) and the BJP are in touch with him but avoided questions on Manjit Singh, another former MLA from the chief minister’s party, who met the RJD leader recently, fuelling speculations of crossing over but backed down reportedly after receiving a call from Nitish Kumar.

Tejashwi Yadav said, “It is not just my assertion that this government is going to fall. It is the wish of the people of the state that we topple it. The reason is, the sentiment during the assembly elections was in favour of our Grand Alliance. The NDA got the majority inexplicably.”

Lalu Prasad will be delivering his speech virtually from the national capital.

Tejashwi Yadav also accused Nitish Kumar of promoting “corruption in transfers and postings by giving a free hand to his chosen bureaucrats” and referred to the recent episode of Social Welfare Minister Madan Sahani’s resignation threats over officials obstructing transfers and postings approved by the cabinet members.

When asked about the controversy over alleged attempts of land grabbing and extortion by a brother of Deputy Chief Minister and senior BJP leader Renu Devi, Tejashwi Yadav remarked sarcastically, “All your sins get washed away if you join that party. No action can be taken against you thereafter.”

The RJD leader was also asked about his recent offer of support to LJP’s Chirag Paswan, who has been cornered in the party founded by his father and headed by him following a rebellion led by his uncle Pashupati Kumar Paras.

“Our sympathies are with Chirag Paswan. He has been wronged. The split in LJP has been obviously engineered by the JD(U).

“But he has to take a call whether he wants to remain with those believing in the Constitution or those swearing by Bunch of Thoughts,” said Mr Yadav, referring to the famous work of MS Golwalkar, one of the prime ideologues of the Rashtriya Swayamsevak Sangh.

When asked what his party’s strategy will be in the upcoming Monsoon Session of the state assembly, the Leader of Opposition said, “We will have to discuss that. The last session saw unprecedented things happening when honourable members were dragged out of the premises by the police and physically harmed and female legislators were treated in the most disgraceful manner.”

The state cabinet has approved a proposal to call the Monsoon Session of the two houses of the Bihar legislature from July 26 to July 30.

During the Budget Session, members of the Grand Alliance which is headed by the RJD, had held the Speaker hostage in his chamber in an attempt to prevent the passing of a bill that aimed to further strengthen the police force.

The Bihar Special Armed Police Bill, 2021 was passed by voice vote with the opposition staging a walkout.

“It is the same House on the floor of which Karpoori Thakur had staged a demonstration that continued late into the night. Never before, though, was the police called inside,” Mr Yadav added.

Karpoori Thakur, former Chief Minister of Bihar, had been a mentor to both Lalu Prasad Yadav – Tejashwi Yadav’s father – and Nitish Kumar.