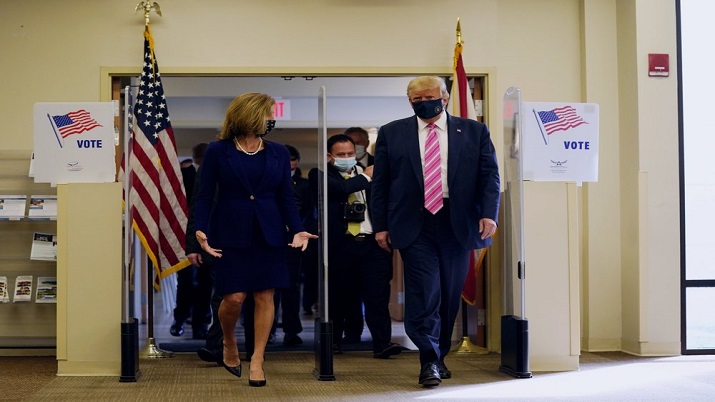 US President Donald Trump said he voted ‘for a guy named Trump’ on Saturday and called it an ‘honor’ to cast his own ballot in his adopted home state of Florida before he jetted off to campaign in three battleground states, where large crowds awaited even as coronavirus cases are surging to records in the country.

Last year, Trump shifted his permanent residence and voter registration from New York to Florida, a decisive state for his re-election, Xinhua news agency reported on Saturday citing a Reuters report as saying.

President Trump, who spent the night at his Mar-a-Lago resort after campaigning Friday in Florida, stopped at an early voting polling site set up at a public library. The president last year switched his official residence from New York to his private Florida club, complaining that New York politicians had treated him badly.

Trump opts to vote in person

Greeted at the polling site by a crowd of cheering supporters, Trump could have mailed in his ballot, but opted to vote in person. He wore a mask inside, following local rules in place to mitigate the spread of the coronavirus.

Trump, who has made unsubstantiated claims of massive fraud about mail-in voting, gave another plug to in-person voting.

Rallies were planned for Lumberton, North Carolina, Circleville, Ohio, and Waukesha, Wisconsin, and the president promises to go full throttle over the final 10 days of the campaign even as the number of new daily coronavirus cases continues to climb.

In the 2016 presidential election, Trump won Florida, a major swing state, by 49.02 per cent of the votes, while his then Democratic rival Hillary Clinton came in close with 47.82 per cent of the ballots.

According to the latest RealClear Politics polling average, Democratic presidential nominee Joe Biden was currently leading Trump in Florida by 1.4 percentage points or 48.2 per cent to 46.8 per cent. After voting, the President hold rallies in the three states, all won by Trump in 2016.

With just 10 days before the November 3 election, around 53.5 million American citizens have already cast early votes, marking a record pace in more than a century, according to the US Elections Project.

In the wake of the ongoing coronavirus pandemic, more Americans are choosing to vote by mail than ever before.