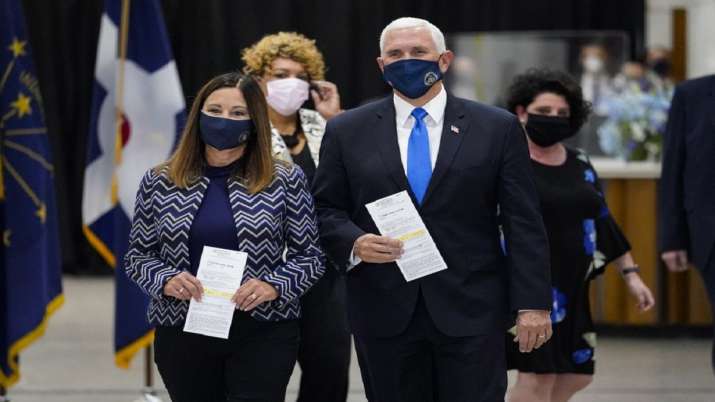 Mike Pence, incumbent Vice President of the United States of America has already casted his vote along with wife Karen in Indianapolis saying it was a “Great honor, great to be back home again. Really great.” With 10 days to go until Election day, there has been a record number of early votes cast so far in 2020.

Who is Mike Pence

Michael Richard Pence, a lawyer and politician by profession, is serving since 2017 as Vice President of United States under Trump administration. In his political life so far, Pence served as the 50th governor of Indiana from 2013 to 2017 and served six terms in the US House of Representatives from 2001 to 2013.

Born on June 7, 1959, in Columbus, Indiana, Mike Pence is the younger brother of US representative Greg Pence.

He persude his higher education from Hanover College, securing a law degree from the Indiana University Robert H. McKinney School of Law. In the year 2000, Pence was elect4ed to the US House of Representatives, representing Indiana’s 2nd and 6th Congressional districts from 2001 and 2013.

The much-awaited vice presidential debate between Mike Pence and Kamala Harris saw the duo sparring on US President Donald Trump’s handling of the coronavirus pandemic, jobs, China, racial tensions and climate change, less than four week’s ahead of the election.

Harris, the Democratic Party’s vice president nominee described the Trump’s handling of the COVID-19 pandemic as the “greatest failure of any presidential administration in the history” of America as she opened the vice debate with a sharp attack on Vice President Pence, who leads the president’s coronavirus task force.

The live debate at The University of Utah in Salt Lake City was a civil one between the two leaders, separated by plexiglass barriers, compared to last week’s showdown between President Trump and his Democratic challenger and former vice president Joe Biden, which degenerated into insults and name-calling.

During the 90-minute one-off debate before the November 3 presidential election, Harris, 55, and Pence, 61, stuck to their known campaign positions on major topics.

Soon after his nomination, Pence expressed his support towards Trump over his call to temporarily suspend immigration from countries where terrorists influence and impact represents a threat to the United States.