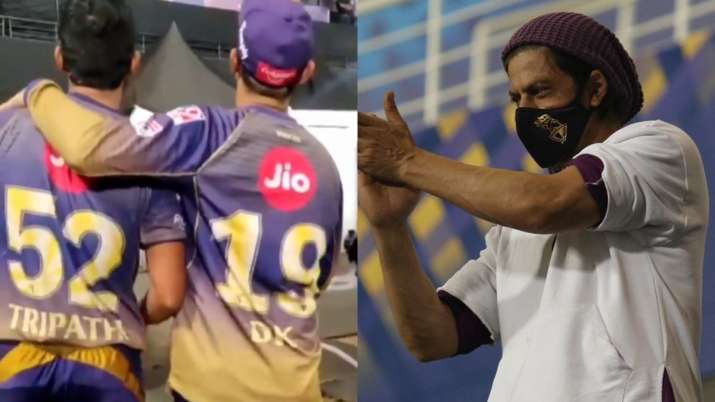 Kolkata Knight Riders’ Rahul Tripathi was the star of the night against Chennai Super Kings on Wednesday as the KKR registered a terrific 10-run victory. Tripathi, who opened the batting alongside Shubman Gill for the side, scored 81 off 51 deliveries against the CSK, steering the side to a competitive score of 167 in 20 overs.

Tripathi had come to bat at number 8 against Delhi Capitals and impressed with a 16-ball 36 cameo, but his knock went in vain as KKR fell short by 19 runs.

As Tripathi produced a match-winning performance, he was named the man of the match against CSK. KKR owner Shah Rukh Khan, who was present at the stadium for the match, also shouted the iconic dialogue from his movie ‘Dil toh Pagal hai’, “Rahul, naam toh suna hi hoga” as the batsman accepted the award in the post-match presentation.

In another video posted by the KKR, Dinesh Karthik could be seen introducing Tripathi to Shah Rukh. In the video, Tripathi is seen whispering into Karthik’s ear and the KKR captain immediately calls out Shah Rukh and points towards Tripathi, saying “Shah Rukh bhai, biggest fan of yours.”

He further says, “‘While batting he (Tripathi) kept asking, ‘Is he [SRK] watching me’. That is all that he kept asking.”

This followed an applause from Shah Rukh and all the other members of the KKR sitting alongside him. The KKR owner then wished them luck.

KKR’s win against CSK was their third of the season, which has steered them to fourth position in the points table. The side has played five matches so far and will return to action on Saturday, as it takes on the KXIP who are at the bottom.