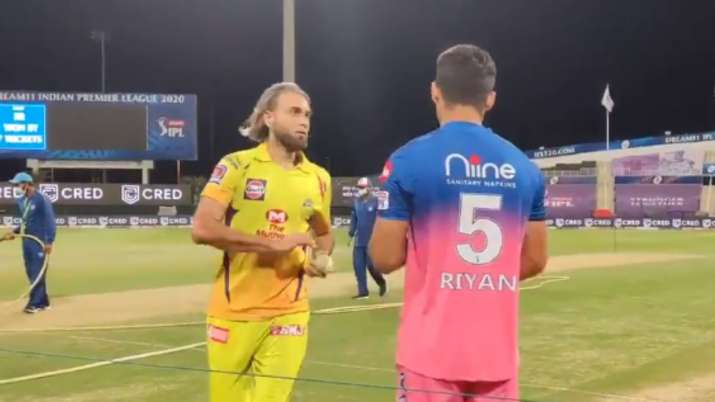 Imran Tahir may have only played his first match of the tournament last night against Mumbai Indians, but he remains actively involved with players – and it was evident with Rajasthan Royals’ heartwarming video on their social media platforms.

In the video, Tahir could be seen mentoring RR youngster Riyan Parag on the various leg-spin variations. He spends quality time with Parag as he explains the minutaes among the different variations of leg-spin.

Tahir specifically explained on how to generate pace while bowling leg-spin, focussing on the pressure on the leg while bowling the delivery. Parag listens to his advice and follows, which draws compliments from the veteran South African bowler.

The CSK leg-spinner, who was the Purple cap winner in the last year’s edition, played his first game of the tournament last night against Mumbai Indians. However, it was a largely one-sided affair as MI restricted CSK to 114/9, before chasing the target without losing a wicket.

Rajasthan Royals are currently seventh in the league table with 8 points from 11 matches. However, their chances for a top-4 berth remain alive and they will hope to put pressure on the other teams in contention for the final playoff spot on Sunday when they take on the Mumbai Indians.