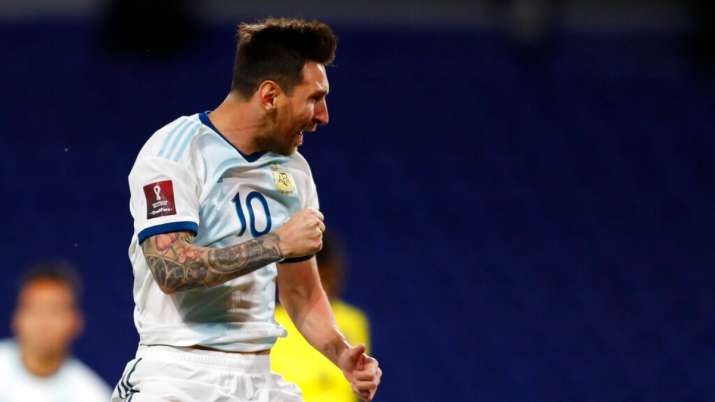 In their first matches in almost a year, Argentina and Uruguay won their South American World Cup qualifying openers on Thursday without doing much to impress their fans watching from home.

Lionel Messi and Luis Suárez each scored from the spot, but did little else to energize the empty stadiums of a region still hard hit by the COVID-19 pandemic.

Messi netted the only goal of Argentina’s victory over Ecuador at the La Bombonera stadium, while Suárez opened the scoring in Uruguay’s 2-1 last-minute win over Chile in Montevideo. Paraguay was held to a 2-2 draw by Peru.

The rest of the opening games in South American qualifiers for Qatar 2022 will be completed Friday, when Brazil, possibly without Neymar, hosts Bolivia and James Rodriguez’ Colombia plays against Venezuela. All 10 teams will be on again on Tuesday.

South America will have four direct berths in the next World Cup. Brazil, Argentina, Uruguay and Colombia, in that order, start as favorites for those spots. The fifth-best team can earn qualification through an intercontinental playoff, with Peru and Chile as strong contenders. The qualifying phase ends in March 2022.

Messi did have more liberty with his national team than he has had recently at Barcelona. Despite the goal from the spot in the 13th minute, he did not shine as expected and saw his two attacking teammates, Lautaro Martínez and Lucas Ocampo, waste opportunities in the match in Buenos Aires.

“It was a tough year for all the world, for us Argentinians. To be able to play and give some joy to people with this victory, beyond the match itself, is good to take some of the stress off,” Messi said. “What matters is that we won and now we have to keep growing, as we have done since the Copa America last year.”

Messi, who is yet to win a trophy with his national team, had only two shots on goal.

Ecuador threatened Argentina’s lead at times during the second half, despite having little time to prepare under new coach Gustavo Alfaro.

Messi was allowed to play despite receiving a red card during the 2019 Copa America. The punishment was erased because it was supposed to be carried out within one year.

Argentina’s next challenge will be against Bolivia in the altitude of La Paz. Ecuador will welcome Uruguay.

Without Edinson Cavani, who missed selection because of his lack of action in recent months, striker Luis Suárez was expected to be Uruguay’s key player against Chile. And he seemed set for that after opening the scoring in the 39th minute with a penalty awarded by video review.

But Chile did not allow the new Atletico Madrid target man to dictate play, and made it 1-1 in the 54th when veteran striker Alexis Sanchez beat Uruguayan goalkeeper Martín Campaña with a gentle right-leg shot.

As coach Oscar Tabarez predicted, Uruguay missed its hardcore supporters in the Estadio Centenario. But just as the few staffers and players in attendance thought the match would end in a draw, Maxi Gómez struck from the edge of the box at stoppage time.

“There’s still a lot of uncertainty in these qualifiers, we just don’t know how it will be,” Tabarez said, in a reference to the pandemic. “To play without fans affects us a lot. As long as there is no attendance this will not be soccer.”

In his celebration, Suárez showed a shirt that wished goalkeeper Fernando Muslera well. Muslera is recovering from a leg bone fracture and his mother died recently.

Uruguay will face Ecuador in the next round. Chile will host Colombia.

Peru striker André Carillo was the key figure of the match at Paraguay’s Defensores del Chaco stadium. He opened the scoring in the 52nd minute with a powerful right-foot volley, kept the pressure on the hosts and made Peruvians believe they could leave Asuncion with a victory.

But then substitute Ángel Romero netted a brace from close range, in the 66th and in the 81st minutes, to put Paraguay ahead.

Carillo’s powerful header in the 85th equalized for Peru, giving the visitors a point in Paraguay before hosting Brazil in Lima on Tuesday.

Also on Tuesday, Paraguay will play at Venezuela, the only South American team that has never qualified for a World Cup.