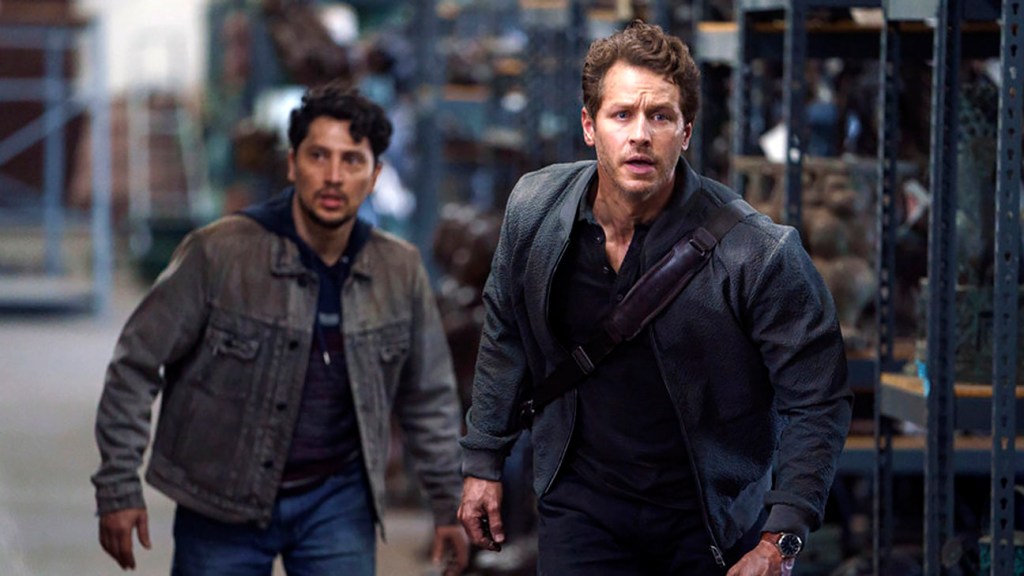 Despite all the happy news, Jeff Rake knew something was very wrong.

It was early June, and the showrunner’s NBC mystery thriller, Manifest, had just aired its season 3 finale. Fans were pleased with the season overall and excited by the show’s cliffhanger. NBC likewise had nothing but positive feedback about the show creatively. The show’s recent ratings were lower than its second season, but not by much. Plus, Manifest‘s first two seasons had just debuted on Netflix in the U.S. and Canada and it was already charting among the streamer’s most-watched titles. By the amorphous standards of TV series buzz, Manifest was seemingly on its way to ascending to a higher level of popularity.

So the problem wasn’t anything that Rake was hearing, it was all the things he wasn’t. The show’s season 4 pickup still hadn’t come through and, more worrisomely, he wasn’t getting any forward-looking questions from NBC. Rake is a veteran writer-producer — his credits range from hits like Bones and Boston Legal to short-lived efforts like The Mysteries of Laura and The Tomorrow People. He had, in other words, been down this road before.

“It’s about what’s not being said,” Rake says. “The normal notes process as you transition from one season to another wasn’t happening. I wasn’t hearing much of anything from the network. I would ask my colleagues at the studio if there was anything that we could do to help, from a creative standpoint, to get to a favorable decision for future seasons of Manifest. We consistently heard back the issues on the table weren’t creative, they were financial. I think there was a lot of internal hand wringing going on at NBC because I think they really did like the show and they were just trying to see if they could make an economic case for it. That was a tough period. There’s that old joke about the cat being on the roof and it was very clear to me the cat was on the roof.”

The dreaded confirmation call came the night of June 14. NBC had canceled Manifest. But even then, Rake already was feeling some fresh optimism. The studio was fully on board with shopping the series elsewhere and anybody who turned on Netflix could plainly (plane-ly?) see Manifest was right there under the “Top 10” banner. Then next morning, when the cancelation news broke wide, fans flooded Twitter with their support.

“I’ve had shows canceled before and this is the first time that I experienced such a wave of support among the fandom,” Rake says. “A small group of super fans formed a Twitter group and said, ‘We got you Jeff. #SaveManifest. The campaign is beginning.’ So before we even had a chance to lift a finger to figure out if we need a PR campaign to help save us, the fans rose up and created this campaign and spread the word – which was incredibly rewarding and heartening.”

Over the next several weeks, the news concerning the show’s fate continued to oddly get both better and worse at the same time.

On one hand, Manifest kept gaining traction on Netflix, and even hit No. 1 on the show’s Top 10. And fans on social likewise didn’t give up. “Soon the [social media conversation] was as much about season one as it was about the end of season three – so it was quite clear to me an untold number of new fans were not only sampling the show, but watching all 42 episodes,” Rake said.

Yet the dealmaking was dragging out. One sticking point was that WBTV had already sold Manifest internationally in several key territories, a key stumbling block for Netflix. “What we really strive for is to have great shows available to all our members globally,” Netflix head of global TV Bela Bajaria says. “We really want all our members to have the full benefit of the service, so we wanted Warner Bros. to take to the time to get all those rights globally.”

Another concern was that the cast’s contracts had lapsed. This is often a point of no return – if one of the show’s key stars like Josh Dallas or Melissa Roxburgh gets snatched up exclusively by another show, Manifest would be finished. And either way, picking up the show would require making all-new deals.

“That was really hard for my colleagues and for the actors themselves, because the actors wanted the show to continue,” Rake says. “As soon as we started seeing glimmers of life at Netflix, the studio reached out to the representatives for the series regulars and asked them, ‘Hey, can you give us an extension for a couple of weeks as we see if we can possibly make a deal here?’ And they all did. But then even the extension for the option ran out.”

And at that point, Manifest was like an overloaded airliner out of gas at 30,000 feet trying to somehow glide back down to a runway.

But something surprising happened: NBC had re-entered the chat.

To his credit, Rake did not have the reaction some might have had when a network axes your series, puts you through many weeks of massive uncertainty and stress, and then only becomes interested in your show again after another party starts seriously courting it.

“While it would be easy to go to a place of ‘I told you so’ spite, no, truthfully, as soon as I found out that we had a lifeline potentially at NBC, I felt nothing but gratitude,” Rake says. “They had always been champions of the show and they genuinely wanted it back. But at the same time, it soon became clear there was just a more compelling case to be made moving the show over to Netflix and starting and ending with the legions of new fans that had emerged in the Netflix universe.”

Over at Netflix, executives trying to decide whether to rescue the series were laser locked on one factor, the key signal amid a lot of noise. It wasn’t the #SaveManifest hashtag or the petition or the letters or media coverage. It wasn’t even the effort to buy a protest billboard outside Netflix headquarters. What scored Manifest a critical fourth and final season were those top-secret numbers created by viewers binging the show’s first two seasons.

“Fan enthusiasm is always great to see, but it really isn’t the emails or tweets — it was all about the viewing,” Bajaria says. “To save a show in this way, it has to have that fan viewing. I appreciate their passion and being connected to the characters, but the viewing is the thing that saved the show.”

Netflix reveals to The Hollywood Reporter that 25 million accounts in the U.S. and Canada watched the show within its first 28 days of streaming. Moreover, Manifest relentlessly stuck around in the service’s Top 10 for 71 days since its debut and was No. 1 in the U.S. for 19 days. The show’s completion rate — a figure Netflix guards closely — was likewise very strong, and boded well for a potential worldwide expansion (much has been made of NBC vs. Netflix Manifest viewing numbers, but from Netflix’s perspective, this summer is bit like preview of what the show could look like across 190 countries and four seasons). “We definitely saw the audience stayed with the show,” Bajaria says.

Of course, the social media campaign helped draw attention to the show which, in turn, may have resulted in more viewers actively watching on Netflix then Manifest otherwise would have gained without the hashtag effort. Ultimately, not every cause-and-effect aspect of this is quantifiable, which is perhaps all the more reason Netflix keeps its eyes on the data that most definitely is.

Rake presented Netflix executives with three different options to wrap up the show: A two-hour movie, a six-episode limited series or full season. “I gave them the small, the medium and the large,” Rake says. Naturally, he hoped the streamer would opt for the third option, and it did.

A deal for a 20-episode final season struck (“When the official call came, I’m pretty sure I broke into a happy dance,” Rake says), though some of the finer points are still being worked out. The season likely will be split into two parts, with the first probably airing in late 2022. The international territories conflict is being solved with a combination of tactics: Some foreign rights are being bought back while others are being waited out – the new episodes will not debut globally all at once but will have a staggered roll out, with some territories getting the show a little later than others.

The show’s stars are on board, but not all actor deals are done (Matt Long, for instance, has a conflict, starring in the NBC drama pilot Getaway, but has indicated that he should be back for “some” of season four).

The production also is angling for a significant budget boost that one source says is “well north” of the show’s previously reported $4 million-$5 million per-episode price tag. “It will be an increased budget,” Bajaria says. “We want them to have a good budget that feels creatively fulfilling, but it’s not finalized yet.”

Adds Rake: “Netflix said they want us to continue making the show we’ve been making and if they can help with some extra bells and whistles to make it more compelling and spectacular, they want to be able to support that. But I think that it will still feel like the show people have fallen in love with. It’s going to be an incredibly visual 20 episodes and there’s some important [location filming] that’s always been built into the roadmap.”

For Netflix, the pickup means gaining another cult favorite flipped series, with Manifest joining Lucifer (Fox), Cobra Kai (YouTube) and You (Lifetime). The pickups along with licensing of popular broadcast faire (Seinfeld hits the service next month) has some wondering if the service is starting to aim too broadly, an idea Bajaria dismisses. “We have over 200 million members and having everyone’s favorite show is something we take a lot of pride in,” she notes. “Sometimes people want to put us in a box — ‘are you broadcast or premium?’ It’s an old fashioned way of looking at the business because people have a lot of different tastes and moods and we’re trying to do great shows in all different kinds of genres.”

While for Manifest, the move means more-or-less the same show Rake had planned, though some episodes might run a little longer if needed given Netflix’s lack of time constraints, and overall there will be some “slight condensing along the way” of his planned story compared to what would have aired on NBC.

Ironically, the deal also means the show’s in-story “death date” awaiting the passengers of Flight 828 might even coincide with the show’s own death date – one that, after the efforts of so many and after  so many real-life twists, are starting to look as if they fatefully coincide.

“We established early on there is a death date in our mythology of June 2nd, 2024, when the story has a happy or a sad or a mixed ending,” Rake says. “I walked [Netflix] through a bunch of twists and turns, I’ve always had a bunch of big flags in the sand – things that would happen along the way. But the excellent news is that they’re now going to be able to see them all play out in real time, because the 20 episodes that I have been gifted allows me to take the entire roadmap that I already had planned out in front of me and overlay that over these 20 episodes. Fundamentally, I’m going to be able to continue telling the story that I was always going to tell.”

A version of this story first appeared in the Sept. 15 issue of The Hollywood Reporter magazine. Click here to subscribe.