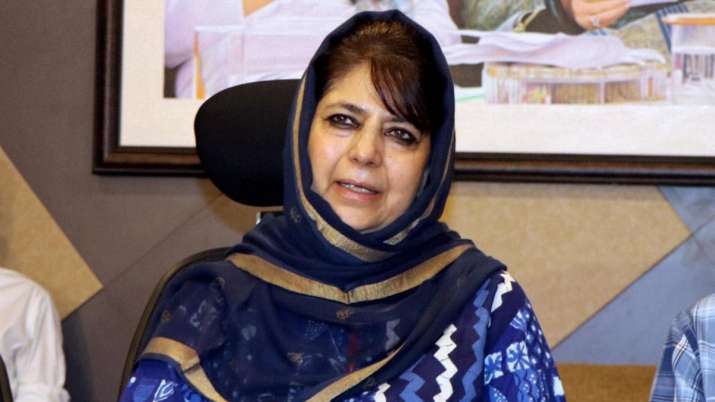 Peoples Democratic Party (PDP) chief Mehbooba Mufti on Friday triggered a row, saying she will continue the  fight to “bring back the flag of Jammu and Kashmir. Talking to reporters in Srinagar, the former Jammu and Kashmir chief minister said that she won’t raise any other flag (tricolour) until the state flag was allowed to be hoisted.

“My flag is this (she said pointing to the flag of J&K kept in front of her). When this flag comes back, we’ll raise that flag (tricolour) too. Until we get our own flag back, we won’t raise any other flag. This flag forged our relationship with that flag,” Mehbooba said.

“Our relationship with the flag of this country is not independent of this flag (Jammu and Kashmir’s flag). When this flag comes in our hand, we will raise that flag too,” she went on to add.

Jammu and Kashmir was permitted to have its own flag under the now abrogated Article 370. After the Centre scrapped the act providing special status to the state in August last year, the state flag, which used to fly along with the tricolour at the state secretariat, was removed.

Mehbooba said those who are thinking that the party has abandoned the ‘fight’ for the restoration of Article 370 were mistaken.

“They are mistaken if they think we will stop our struggle for the restoration of  Article 370. We don’t want violence. They disrupt everything in the valley. They are making decisions for Kashmiris which are against the will of people.  They don’t want the people of Jammu Kashmir. They just want the territory. We acceded to democratic secular India. We are uncomfortable with today’s India. This country will work on the constitution and not BJP manifesto. Our people should not lose the hope,” she said.

Mufti was released on October 13 night as the Union Territory administration revoked the Public Safety Act charges against her, more than a year after she was detained following the abrogation of special status of the erstwhile state.