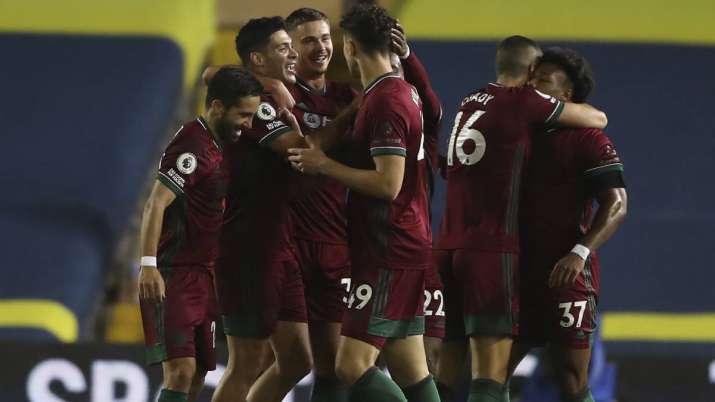 After a feast of goals came a relative famine in the English Premier League on Monday.

Just one across two games — and that being a fortunate deflected effort to earn Wolves a win at Leeds — ended the goal rush that had made the most-watched league in the world even more compelling viewing over the first five rounds.

After West Bromwich Albion and Burnley fought to the first goalless draw of the top-flight in its 47th match, Wolves edged to victory at Elland Road thanks to Raul Jimenez’s second-half shot from the edge of the penalty area that ricocheted in off the bowed head of Leeds midfielder Kalvin Phillips in the 70th minute.

Before Monday, there had been 171 goals in 46 matches for a rate of scoring never previously seen at the start of a season in the Premier League era (since 1992).

Leeds missed the chance to go third in the standings — instead, Wolves climbed above their beaten opponents and into sixth place — after fading following a bright start.

Wolves had a goal by left wing back Romain Saiss ruled out for a narrow offside by the VAR before Jimenez’s third goal of the season.

Burnley, meanwhile, finally claimed its first point of the season in its fourth match, though could have earned all three had Chris Wood’s second-half header not struck the crossbar.

West Brom and Burnley have yet to win in a combined nine games so far, though, and look destined to be among the teams battling to avoid relegation.

Just 447 adverse events across India, most are minor issues |...